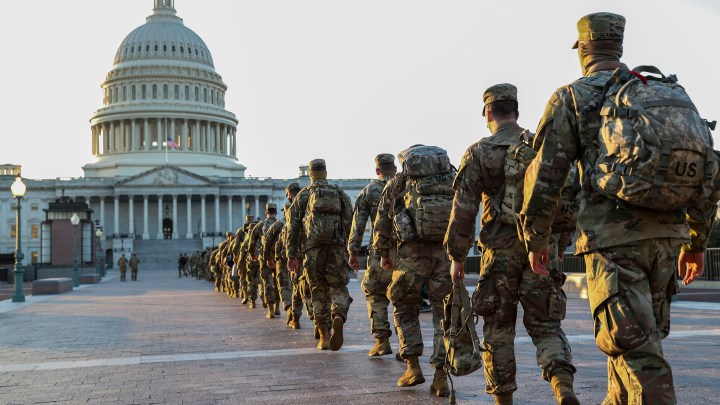 COPY
The continuing threat to statehouses across the country means more expenses for state law enforcement, and, in some cases, the National Guard. Tasos Katopodis/Getty Images

The continuing threat to statehouses across the country means more expenses for state law enforcement, and, in some cases, the National Guard. Tasos Katopodis/Getty Images
Listen Now

The pandemic has really done a number on the budgets of state governments. Tax revenues are down overall because of the economic slowdown, while demands on state government — to spend more on health care, unemployment benefits and food assistance — are way up.

Now, in the run-up to the presidential inauguration, law enforcement has joined that costly mix. The FBI has warned that all 50 states face a heightened threat from potentially violent protests.

The continuing threat to statehouses across the country means more expenses for state law enforcement, and, in some cases, the National Guard, according to Robert McCrie at John Jay College of Criminal Justice.

He said extending security perimeters around major public buildings and adding more surveillance are one-time costs. But the personnel — hundreds of additional armed officers — will cost money long as the threats and violence last.

“State governments are going to bring in not just their capitol police, but state troopers, police from the city, many of them compensated with overtime that has to be paid,” McCrie said.

There may be a longer-term shift in spending to protect government buildings, public officials and their families, akin to the security ramp-up after 9/11.

“It’s not just a threat to legislatures, it’s down to the lowest levels of government,” said Andy Arena, who formerly investigated right-wing extremists for the FBI and now directs the Detroit Crime Commission.

“If you’re not doing what I think is right, I’m going to go to your house, I’m going to harass your family. Local law enforcement, in little rural towns, are going to have to be more locked in with sharing of intelligence.”

State and local budgets will have to absorb those added costs at a time when they’re already strapped for cash due to the pandemic, said political scientist Cal Jillson at Southern Methodist University.

“To increase their spending to secure state capitols, you’re probably going to have to cut somewhere else to come up with that additional money for public safety,” Jillson said.

He said that likely means education and social services will take a hit, since they account for the bulk of state budgets.