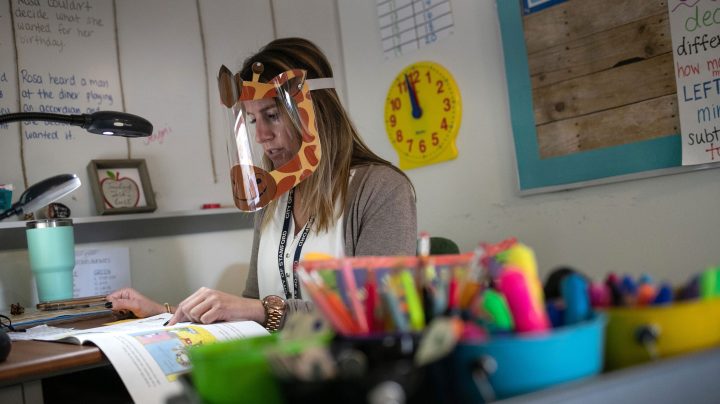 Money for state and local governments whose revenues have been decimated by the pandemic remains a sticking point in Congress as lawmakers continue negotiations over another coronavirus relief bill.

Many Republican senators are opposed to further assistance beyond the $150 billion allocated by the Coronavirus Aid, Relief and Economic Security Act in March, despite warnings from economists that austerity measures by state and local governments will hamper the country’s economic recovery.

Unlike the federal government, most state and local governments are bound by balanced budget requirements, meaning that when revenues decline, they’re forced to either reduce spending or increase taxes.

“And states are subject to this one-two punch in recessions: Just as their revenues are falling, demand goes up for the programs that they provide,” like subsidized health care and cash assistance to low-income people, according to Tracy Gordon, a senior fellow with the Urban-Brookings Tax Policy Center.

It’s a similar story to the financial squeeze state and local governments experienced during the Great Recession, but on a greater scale. This spring, state income tax fell by about 40% and sales tax fell by about 15%, Gordon said.

“State and local governments employ more workers than any other sector — more than retail, more than manufacturing, more than health care — so when they cut jobs, that affects the larger economy.”

“Marketplace’s” Kai Ryssdal spoke to Gordon about what’s at the stake for state and local governments as the recession continues — and how their spending cuts could show up in the overall economy. The following is an edited transcript of their conversation.

Kai Ryssdal: Give me the skinny, would you, on how states and cities were doing, say, January, February, before everything went south?

Tracy Gordon: States went into this year with their highest savings on record, and they expected pretty good revenue growth — around 2.5% to 4% — because of things that had happened at the federal level, the 2017 tax law, and also a Supreme Court decision that made it clear that they did have the authority to tax online sales.

Ryssdal:  So here we are now, nine-ish months later; the world obviously has changed. What are cities and states facing as we head into the holidays and the new year?

Gordon:  The initial shocks to state income and sales taxes were worse than in the Great Recession. Income taxes fell by about 40% in March and April and sales taxes by about 15%. They have come back from that cliff, but there’s a concern that the resurgence that we’re seeing in revenues is temporary.

And states are subject to this one-two punch in recessions: Just as their revenues are falling, demand goes up for the programs that they provide — subsidized health insurance, cash assistance.

Ryssdal: Lay out the medium-ish term future. What’s it going to look like in July next year with cities and states facing these problems?

Gordon: I think one thing that also gets lost in the discussion is that state finances typically lag what’s happening in the economy. If you expect states to collect income taxes on income that was earned in calendar year 2020, that’s going to affect their finances in 2021. And to the extent that unemployment remains elevated, states themselves are projecting revenue losses going up to 2024.

Gordon: At the outset; I think revenue estimators are paid to be conservative. And everything depends on how we contain this virus. There’s a lot of evidence that shows that it’s not necessarily the stay-at-home mandates, but people’s fear that’s prevented them from transacting in the marketplace. So I think that when people start to feel safe again, that’s when you’ll see revenues bouncing back.

Ryssdal: If the Biden administration calls you on the afternoon of Jan. 20, after the inauguration, and says, “What do you think we ought to do about structuring an aid package for cities and states?” What are you going to tell them?

Gordon: I wrote a blog about this where I said it should be fast, flexible, and formula driven, and I still think that’s the case. So I would be in favor of tying it to economic conditions like unemployment.

In the Great Recession, we saw aid turn off in the summer of 2011, but states faced bad budget years for another roughly two years or so. State and local governments employ more workers than any other sector — more than retail, more than manufacturing, more than health care — so when they cut jobs, that affects the larger economy. And what we saw in the Great Recession was that, for almost every quarter between 2009 and 2014, [state and local government budgets] were a drag on the overall economy. So we don’t want that to happen again.

Ryssdal: A word here about how this is going to manifest itself for people just out there trying to get by. I mean, if they don’t have the money, states and cities don’t have the luxury of the federal government of deficit spending or creating more money on the books, so they have to cut somewhere.

Gordon: Exactly right. And most of what state and local governments do is labor intensive. They provide services that people and businesses depend on. So I think what we saw in the first couple of months of this [was] they cut a lot of jobs. We saw 1.3 million jobs cuts since March, mostly in education. That affects things like the quality of education; to the extent that they’re cutting back on capital projects, that affects infrastructure — things that contribute to economic growth going forward.