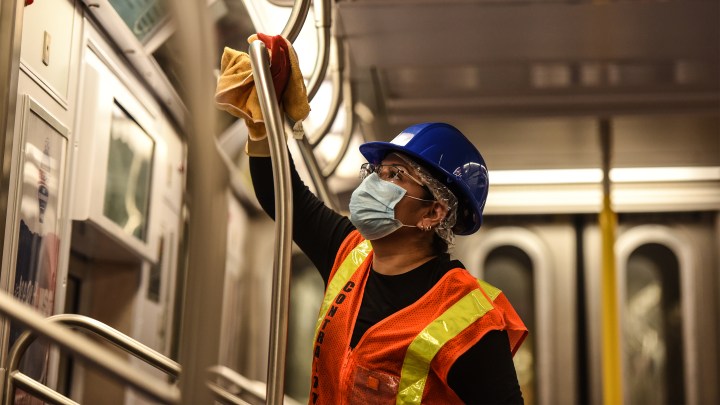 COPY
A cleaning crew disinfects a New York City subway car. Much of the money states received from the federal government has gone toward preventing the spread of the coronavirus. Stephanie Keith/Getty Images
COVID-19

A cleaning crew disinfects a New York City subway car. Much of the money states received from the federal government has gone toward preventing the spread of the coronavirus. Stephanie Keith/Getty Images
Listen Now

By and large, they are in need — state tax revenue is down, spending is up and red ink is everywhere.

“In April and May alone, states and localities have either furloughed or laid off 1.5 million workers — about twice as many [as] in the entire aftermath of the Great Recession,” Johnson said.

States got a round of funding from the federal government in March, but that money has already been budgeted.

“It’s unclear that the amount that was appropriated in March — when we didn’t realize how long this crisis would endure — is sufficient to those kinds of challenges,” Gordon said.

Without more federal aid, states don’t have many options. They could borrow more, like from the Fed’s Municipal Liquidity Facility.

But Abby Urtz, senior vice president at FHN Financial, said many states are required to balance their budgets every year.

“It’s really uncomfortable for them to go out into the markets, or to tap a Fed facility or other loans to borrow for cash flow,” she said.

Giving states money is the most effective way for the federal government to shore up the safety net, Gordon said.

State and local governments, Gordon said, represent around 12% of the country’s GDP.

Helping them helps the rest of the economy, too.