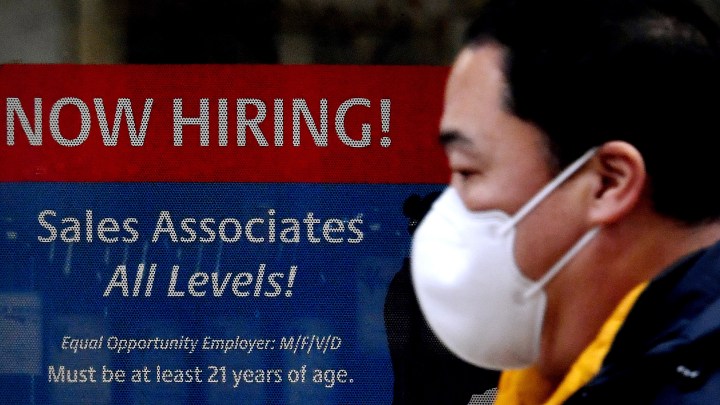 There are plenty of things holding people back from taking a bevy of available jobs. Olivier Douliery/AFP via Getty Images
COVID & Unemployment

There are plenty of things holding people back from taking a bevy of available jobs. Olivier Douliery/AFP via Getty Images

America’s employers scaled back their hiring last month as the viral pandemic accelerated across the country, adding 245,000 jobs, the fewest since April and the fifth straight monthly slowdown.

At the same time, the unemployment rate to a still-high 6.7%, from 6.9% in October, the Labor Department said. November’s job gain was down from 610,000 in October.

Friday’s report of another slowdown in hiring was the latest evidence that the job market and the economy are faltering in the face of a virus that has been shattering daily records for confirmed infections.

Before the pandemic, last month’s gains would have been considered healthy. But the U.S. economy is still roughly 10 million jobs below its pre-pandemic level, with a rising proportion of the unemployed describing their jobs as gone for good. Faster hiring is needed to ensure that people who were laid off during the pandemic recession can quickly get back to work.

Two enhanced federal unemployment benefits programs are set to expire at the end of December — just as viral cases are surging and colder weather is shutting down outdoor dining and many public events. Unless Congress enacts another rescue aid package, more than 9 million unemployed people will be left without any jobless aid, state or federal, beginning after Christmas.

Friday’s report coincides with renewed efforts in Congress to reach a deal on a new rescue aid package. A bipartisan group of senators has proposed a $900 billion plan that would include expanded unemployment benefits, more small business loans and aid to state and local governments. But there are no signs of any imminent agreement.

The gravest threat to the economy remains the raging virus, and most experts say any economic recovery depends on how fast an effective vaccine can be widely distributed and used. U.S. deaths from the coronavirus topped 3,100 Wednesday, a new high, with more than 100,000 Americans hospitalized with the disease, also a record, and new daily cases topping 200,000. In response, at least 12 states have imposed new restrictions on businesses in the past month, according to an Associated Press tally.

For now, there are signs that the economic recovery is stumbling. Consumer spending grew in October at the slowest pace in six months. Seated diners at restaurants are declining again, according to data from the reservations website OpenTable. And a Fed report on business conditions found that growth cooled last month in several Midwest regions and in the Fed’s Philadelphia district.

Still, the full impact of the worsening pandemic may not be evident in Friday’s jobs report, which measures hiring trends in the middle of the month. Some state restrictions weren’t imposed until later in November. As a result, some economists say the worst consequences of the pandemic won’t appear until the December jobs report is issued in early January.