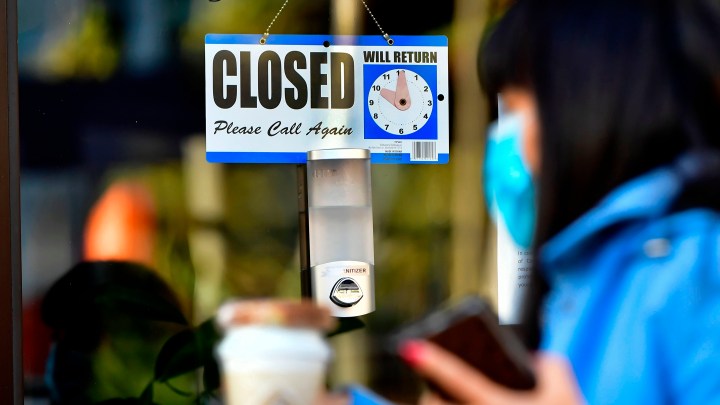 COPY
A pedestrian wearing her facemask and holding a cup of coffee walks past a closed sign hanging on the door of a small business in Los Angeles on Nov. 30, 2020. Frederic J. Brown/AFP via Getty Images
COVID & Unemployment

A pedestrian wearing her facemask and holding a cup of coffee walks past a closed sign hanging on the door of a small business in Los Angeles on Nov. 30, 2020. Frederic J. Brown/AFP via Getty Images
Listen Now

The arrival of the first Friday of December means it’s time for the Labor Department’s latest reports on hiring and unemployment covering November.

It’s been a roller-coaster year for the labor market, with millions of jobs lost early in the pandemic and some of them returning as the economy reopened.

But the pace of job gains has slowed since late summer. And there are some worrying economic signs for the job market going forward.

To get Americans back to work, there has to be more work for them to do.

Payroll processing companies track this; they know from week to week whether employers are scheduling more workers for more shifts. Dave Gilbertson at payroll processor UKG said that, recently, the trend has been going in the wrong direction.

“We saw a consistent slowdown in workforce activity in the month of November,” Gilbertson said.

He said “workforce activity” — the number of employee work shifts — is being dragged down in part by rising COVID cases.

In a typical November, Gilbertson said we usually see “a really big buildup among retailers as they head into their busy season. We were missing retailers this year, and so I think that was felt among hourly employees across the country.”

And it’s employees of small businesses who are most at risk, Gilbertson said. Among companies with a hundred or fewer employees, “10% to 11% of small companies that were around in March are no longer around. They’re businesses that just couldn’t wait it out long enough to survive in this kind of economy.”

Fewer employers and less work to do spell trouble for anyone looking for a job, said Jed Kolko, chief economist at Indeed.

“Look at job postings on our site. Postings are down about 12% below last year’s trend,” Kolko said. “Since August, improvement has slowed down a lot.”

For some job categories that have done well in the pandemic — e-commerce delivery and almost any work that can be done from home — job postings are back to pre-pandemic levels.

But for service jobs in travel and leisure, arts and entertainment, postings are still down by half

Taken altogether, “we’re beginning to see the economy slow down in the fourth quarter,” said Bernie Baumohl, chief global economist at the Economic Outlook Group. “It looks even more concerning for the first quarter.”

Baumohl said the risk will continue to grow the longer the economy goes without more federal aid for small businesses, state and local governments and the unemployed.

“We’re going to be seeing more companies declare bankruptcy, more households in extreme financial crisis, more people being laid off, an even greater divide among income groups,” he said.

Low-income service workers have suffered the most job losses, Baumohl said. And low-wage jobs have been the hardest to get back. 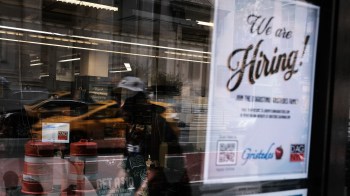