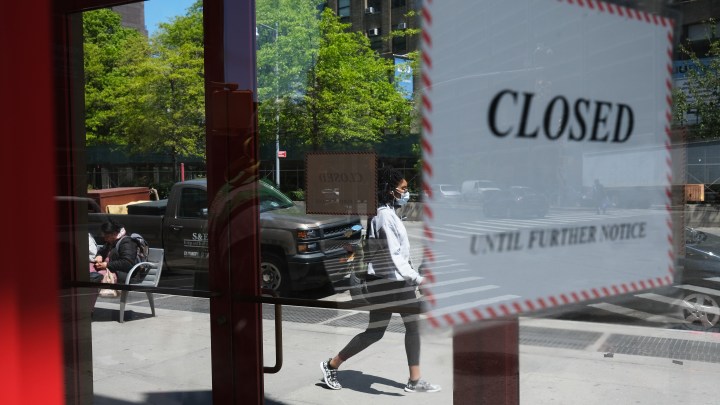 COPY
A shuttered business district in Brooklyn in May. Jobs in some face-to-face services, like bars and restaurants, are still down 15% to 30%. Spencer Platt/Getty Images
COVID & Unemployment

A shuttered business district in Brooklyn in May. Jobs in some face-to-face services, like bars and restaurants, are still down 15% to 30%. Spencer Platt/Getty Images
Listen Now

The jobs report for the month of October was pretty good.

The economy added 638,000 jobs. That’s fewer than in September, but welcome as the job market continues to recover from the cliff it fell off when the pandemic shut the economy down. The unemployment rate came down another point, to just under 7%.

But job gains have been slowing down since the economy first started bouncing back from the massive job losses of early spring. Meanwhile, COVID-19 cases are surging, and there’s no stimulus in sight from Washington.

In some sectors of the economy, most jobs have come back: manufacturing, construction, financial services, warehousing and transportation.

But jobs in some face-to-face services — bars and restaurants, arts and entertainment, child care — are still down 15% to 30%.

“The easiest part of the economic recovery is behind us,” said Jason Furman, nonresident senior fellow at the Peterson Institute for International Economics. He points out 17 million people went on temporary layoff when the pandemic hit. Many have now been called back.

“Most of that has happened already. Now there’s another 8 million people who don’t have an old job to return to,” Furman said. “That’s going to be harder.”

About a third of jobless Americans are now long-term unemployed, without a job and actively looking for six months or longer, said Elise Gould, senior economist at the Economic Policy Institute.

“That is a devastating number,” she said. “As this drags on, I expect those numbers to reach the levels we saw in the Great Recession.”

Back then, nearly half of the jobless were long-term unemployed.

Restoring full employment will be hard, in part, because we’re losing employers at a dizzying pace. Dave Gilbertson tracks this at workforce-management firm Ultimate Kronos Group, which is a Marketplace underwriter.

“Right now, about 10% of companies with fewer than 100 employees that were operating in March are not operating anymore,” he said. “That’s the job recovery that I think is going to take a long time, because you’ve got to get to a place where people are confident enough to reopen businesses.”

Analysts say it may take years before the U.S. economy looks something like pre-pandemic “normal” again.