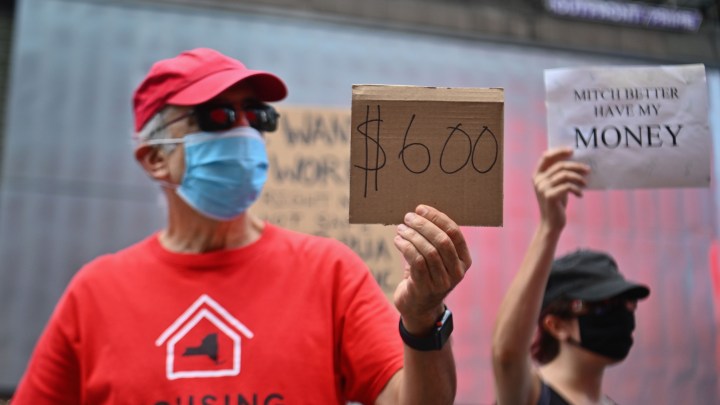 Federal Reserve Chair Jerome Powell warned this week of economic tragedy should Congress fail to provide additional relief for Americans suffering in the pandemic recession. With additional stimulus in doubt, many are growing increasingly worried.

Chester Englander, an orchestra percussionist living in Ohio, was unemployed for much of this year, and so was his musician wife. They have two small children. And he was getting $600 a week in federal unemployment benefits from April to July.

“Once the [federal unemployment] was gone and our savings vanished, quickly I added $6,000 of credit card debt to my one card,” he said. “It was clear things were deteriorating incredibly fast.”

He’s used the credit card to pay for food, mortgage and utilities. His parents, in their 70s, recently had to pitch in.

There doesn’t seem to be any help on the way for the millions of Americans who are suffering. Some are going deeper into debt. And many are dipping into their savings to get by.

Like Chris Dancy, a health consultant in Texas who has been unemployed since the pandemic began.

“I mean, our savings was eviscerated,” he said. “Even with mortgage deferment and lots of plans, you can’t stop your spending fast enough.” His husband is a school teacher who is still working. But with only one income, Dancy is nervous about the future.

So is Cristobal Moris, who has had to defer his dream of buying a house. He works in the New York film industry and was without income for much of the year.

Moris is employed again, but as the city sees a new rise in COVID-19 cases, he said, “My biggest fear right now is if we have another shutdown in the next month and there is no additional government assistance. Then we definitely will have to go start tapping into our savings again.”

Moris said he’s always tried to set money aside for a rainy day.  But he’s worried about how many more rainy days he and his family will have to weather.