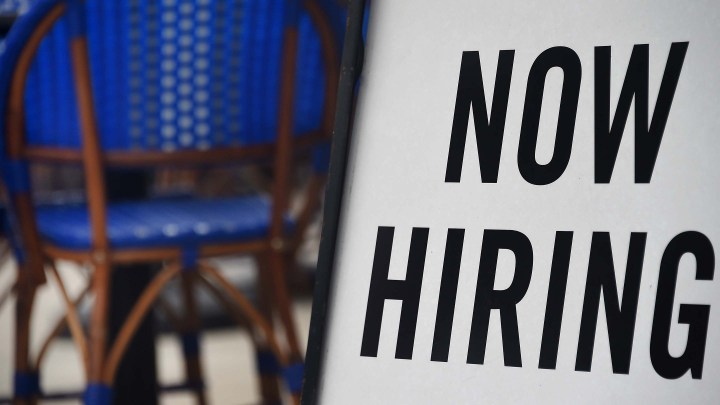 A restaurant displays a "Now Hiring" sign amid the coronavirus pandemic, on August 4, 2020 in Arlington, Virginia. Olivier Douliery/AFP via Getty Images
Listen Now

The official readings on hiring and unemployment for January are in: The unemployment rate dropped to 6.3%, while the U.S. economy added just 49,000 jobs. Some improvement, yes, but the bottom line is the labor market continues to reflect the effects of the COVID-19 pandemic and efforts to contain it.

In December, the economy actually lost jobs for the first time since last spring as COVID surged, lockdowns spread and the weather got too cold for outdoor dining. A longer-term return to full employment will require massive new hiring.

Job postings crashed after the pandemic hit. At the job website Indeed, they went down around 40%. As the economy’s reopened, the number of jobs on offer has crept back up. And postings are now at the same level as a year ago.

“Now, that does not mean we have fully reached a recovered labor market— far from it, ” said AnnElizabeth Konkel, an economist at the Indeed Hiring Lab. “We want to see job postings remain at an elevated level compared to their pre-pandemic baseline, so that we can pull back all those people that don’t have jobs right now, pull them back into the labor market.”

Recovery in the job market so far has been wildly uneven, Konkel said. Demand for workers is very strong in sectors that have been boosted by the work- and shop-from-home boom.

“We see loading and stocking, which you can think of primarily as warehousing, that is up 30%,” Konkel said. “Some other sectors that are up are construction as well as pharmacy. Some of that is likely driven by the vaccine push.”

On the other hand, job postings for bars, restaurants, hotels and travel are still down by double digits.

For hiring to pick up, consumer demand needs to bounce back, said Dave Gilbertson at payroll processor UKG. (Full disclosure: UKG is a Marketplace underwriter.)

“We’re still seeing businesses about 10% to 15% less busy now than they were a year ago,” Gilbertson said. “And that’s translated to a continual struggle to reaccelerate hiring.”

And, Gilbertson said, jobs lost in the pandemic can’t come back if the employers aren’t around anymore.

“We know that about 1 in 6 small businesses that were in operation before the pandemic have now closed their doors and probably are not coming back again,” he said. “That’s a massive, massive impact to Main Street.”

But none of this means it’s a great hiring market for employers, said Amy Glaser at staffing firm Adecco. She said many are still finding it hard to land the talent they need.

“A lot of the reasons why folks may be turning down a job opportunity deal with employees’ health and well-being and/or that of those they live with,” Glaser said. “And we’re seeing child care on the rise as a continuing job-refusal reason.”

The best hope for a thaw in hiring, these experts say, is more vaccination and warmer weather to allow dining and other high-contact activities to resume.