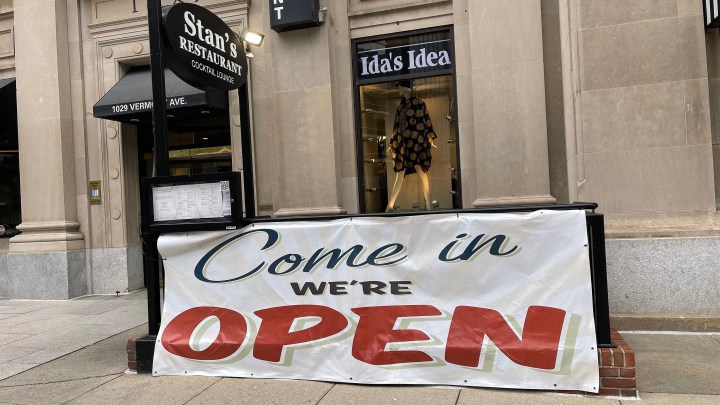 COPY
The industries that have the furthest to go are ones you'd maybe expect: leisure and hospitality, accommodations, food services and restaurants. Daniel Slim/AFP via Getty Images
COVID & Unemployment

The industries that have the furthest to go are ones you'd maybe expect: leisure and hospitality, accommodations, food services and restaurants. Daniel Slim/AFP via Getty Images
Listen Now

U.S. job openings in February increased more than expected, according to the Labor Department. Also, data from last week shows the economy added over 900,000 jobs in March. But a lot of people, especially in certain industries, aren’t feeling the recovery yet.

For all of the good jobs news recently, there are still nearly 10 million people who are out of work, and more than 4 million of them have been unemployed for six months or longer.

“So we still have a very long way to go until we get a full recovery,” said Elise Gould with the Economic Policy Institute. She said the industries that have the furthest to go are the ones you’d expect: “leisure and hospitality, accommodations, food services, restaurants” and the public sector, especially in education.

Michael Strain at the American Enterprise Institute said he expects those public sector jobs to start coming back soon because state and local governments got a lot of money in the latest COVID relief package.

“And also because schools are reopening, and hopefully they’ll all be open in the fall, and they’ll need to hire in order to make that happen,” Strain said.

Strain said he also expects hiring to pick up across the board in the next few months, as all that government aid makes its way into the economy and more people get vaccinated.