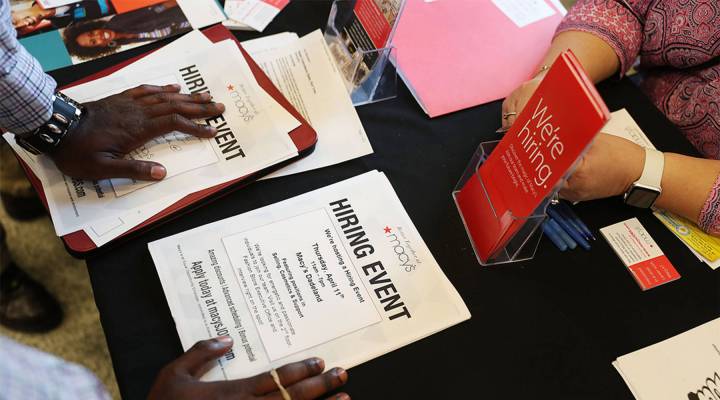 Job hiring paperwork is seen on a desk during a job fair put on by Miami-Dade County and other sponsors on April 05, 2019 in Miami, Florida. The job fair was being held as the Labor Department released its monthly hiring and unemployment figures for March which showed that 196,000 jobs were added last month, a rebound from the February report.  Joe Raedle/Getty Images

Job hiring paperwork is seen on a desk during a job fair put on by Miami-Dade County and other sponsors on April 05, 2019 in Miami, Florida. The job fair was being held as the Labor Department released its monthly hiring and unemployment figures for March which showed that 196,000 jobs were added last month, a rebound from the February report.  Joe Raedle/Getty Images

The economy added 196,000 jobs in March, slightly above consensus and a solid rebound from February, which was revised up, from 20,000 to 33,000. February was not a statistical anomaly — it reflected a real slowdown in hiring, along with bad weather. Meanwhile, the unemployment rate held steady at 3.8 percent. The labor force shrank by 224,000 — fewer people were looking for work.

Average hourly earnings growth slowed to 0.1 percent month-over-month, and 3.2 percent year-over-year (compared to 0.4 percent and 3.4 percent in February, respectively). For workers to regain lost ground from wage stagnation over the recent decade since the Great Recession, wage growth needs to strengthen further. But if it sparks price inflation — which hasn’t happened so far in this economic cycle — there’s a danger the Federal Reserve will renew interest rate hikes to prevent the economy from overheating.

Job growth was centered in health care, professional and business services, construction, food and drinking establishments. There were job losses in manufacturing, continuing a weakening trend driven by the global economic slowdown, a strong dollar and trade conflicts.

African-American unemployment remains stubbornly high, at 6.7 percent. It fell from 7.0 percent in February, but the rate is volatile from month to month due to sample size. Black unemployment is still double the white unemployment rate, which is 3.4 percent. And black men are faring worse than black women — with 6.9 percent unemployment compared to 5.2 percent. Black women have experienced more improvement in the past year than black men.

The March jobs report is decent, but certainly not cause for rejoicing. Nor does it provide evidence that February’s sharp decline came from outer space, or that we’re back to the best of times in the job market. Over the past three months (January-March 2019), the economy has added 180,000 jobs per month. That’s down from 223,000 per month in 2018. The current rate is likely as good as the economy can do at this late stage of the economic cycle, with the labor market tight and fewer people left on the sidelines to jump into the labor force.

And there are signs of weakness: the labor force shrank, wage growth slowed, manufacturing is slowing dramatically and temporary employment isn’t growing. Long-term unemployment is up from this time last year, and underemployment ticked up. But given that other economic indicators are showing more signs of weakness — consumer spending, business sentiment, housing, manufacturing, agriculture — the job market remains a bright spot, overall.