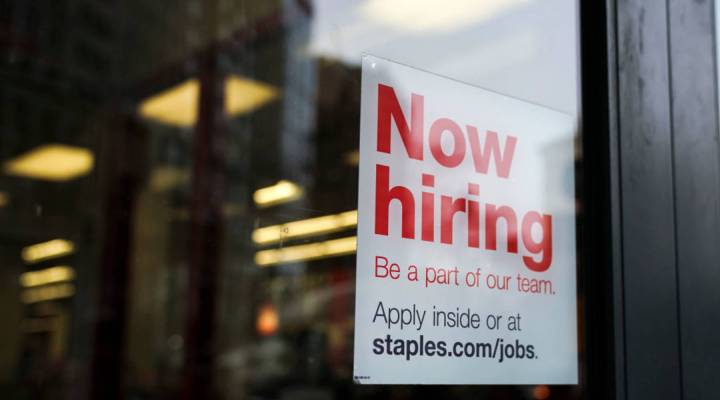 Hiring rebounded in March as U.S. employers added a solid 196,000 jobs, up sharply from February’s scant gain and evidence that many businesses still want to hire despite signs that the economy is slowing.

The unemployment rate remained at 3.8%, near the lowest level in almost 50 years, the Labor Department reported Friday. Wage growth slowed a bit in March, with average hourly pay increasing 3.2% from a year earlier. That was down from February’s year-over-year gain of 3.4%, which was the best in a decade.

The figures reported Friday suggest that February’s anemic job growth — revised to 33,000, from an initial 20,000 — was merely a temporary blip and that businesses are confident the economy remains on a firm footing. Even with the current expansion nearly 10 years old, the U.S. economy is showing resilience.

At the same time, the economy is facing several challenges, from cautious consumers to slower growth in business investment to a U.S.-China trade war that is contributing to a weakening global economy.

So far this year, job gains have averaged 180,000 a month, easily enough to lower the unemployment rate over time, though down from a 223,000 average last year.

In March, job growth was strongest in the service sector. Health care added 61,000 jobs, restaurants and bars 27,000 and professional and business services, which includes high-paying fields such as engineering and accounting, added 37,000.

The overall economy is sending mixed signals. Most indicators suggest slower growth this year compared with 2018. That would mean that hiring might also weaken from last year’s strong pace.

In February, employers added a surprisingly low 20,000 jobs, the fewest in nearly a year and a half, though that pullback likely reflected extreme weather and other temporary factors. Another weak jobs report Friday, though, would fuel concerns about a downshift in growth.

Consumers have shown caution so far this year. Retail sales fell in February, and a broader measure of consumer spending slipped in January, potentially reflecting a waning effect of the Trump administration’s tax cuts. Businesses have also reined in their spending on industrial machinery and other equipment and on factories and other buildings.

And in Europe and Asia, weaker economies have reduced demand for U.S. exports. Europe is on the brink of recession, with its factories shrinking in March at the fastest pace in six years, according to a private survey.

The U.S. trade war with China has weighed on the Chinese economy, which has hurt Southeast Asian nations that ship electronic components and other goods that are assembled into consumer products in China’s factories.

Economists now forecast that the U.S. economy will expand roughly 2% to 2.5% this year, down from 2.9% last year. Still, most economists have forecast a bounce-back in hiring in March to about 170,000 added jobs, according to data provider FactSet. The unemployment rate is expected to remain near a half-century low of 3.8%.

Some positive signs for the economy have emerged in recent weeks: Sales of both new and existing homes rose in February after declining last year. More Americans are applying for mortgages now that rates have fallen.

And some of the weakness in spending earlier this year likely reflected delays in issuing tax refunds because of the government shutdown. Refunds largely caught up with their pace in previous years in March, economists at Bank of America Merrill Lynch said, suggesting that spending may as well.

The low unemployment rate and steady hiring have also raised Americans’ paychecks. Average wages grew 3.4% in February compared with a year ago, the fastest such pace since the recession.

If wage growth continues to accelerate, it should fuel more spending and lift the economy in the coming months.