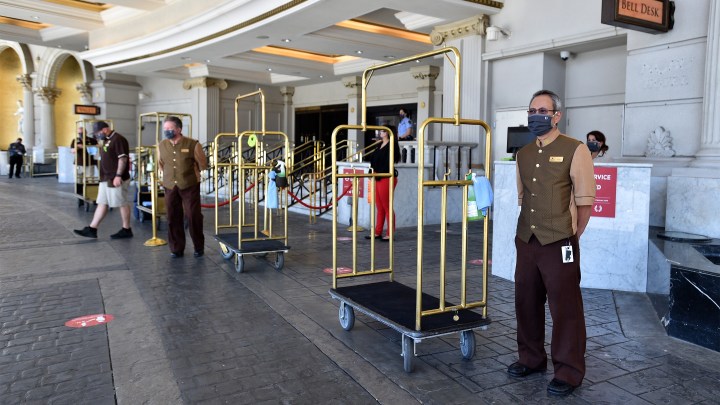 COPY
Employees are ready to receive guests at a hotel in Las Vegas. The industry is struggling during the pandemic as many people have canceled travel plans. David Becker/Getty Images
COVID-19

Employees are ready to receive guests at a hotel in Las Vegas. The industry is struggling during the pandemic as many people have canceled travel plans. David Becker/Getty Images
Listen Now

Fewer of us are traveling these days, and there’s new data showing how that’s affecting the hotel industry. The research company Trepp found that more than 23% of commercial mortgage loans taken out by hotels are at least 30 days delinquent as of July. That’s the biggest delinquency rate since Trepp started tracking this in 2009.

Hotel owners often take out a lot of debt to buy a hotel or build one from scratch. Paying back that debt is a big cost.

“Really, payroll is one huge expense, and the other big expense is your debt service,” said Shaiza Damji, an owner of 360 Degree Hotel Group, which runs six hotels in Washington state near the Canadian border.

Damji said paying back her debt is getting harder. The Canadian border is closed to nonessential travel, and tourism revenue is drying up.

“No conferences, no conventions, the tech industry’s not traveling, so it’s just really soft,” Damji said.

She said she’s been able to tap reserves she keeps with her lender to meet her payments.

Manus Clancy, a senior managing director with the research company Trepp, said that’s what a lot of hotel owners are doing, even though reserves are usually used to fix carpets and broken TVs.

“If your occupancy is 20% right now, the likelihood of you breaking a lot of TVs or staining a lot of rugs is not very high,” Clancy said.

But those reserves can only go so far.

Damji said she can only use her reserves for three more months.