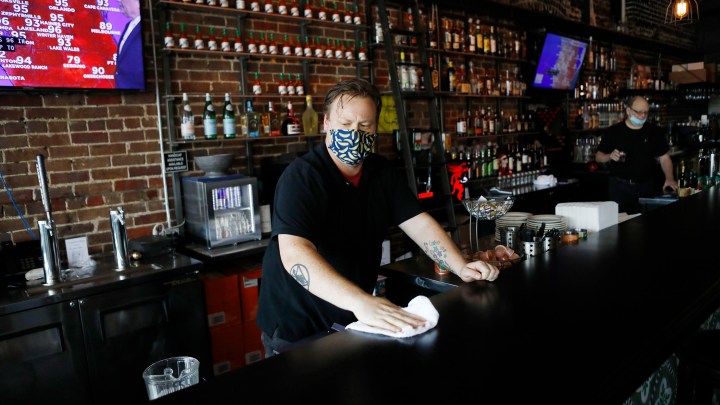 It’s been eight months since Nico Freccia, co-founder of 21st Amendment Brewery in the San Francisco Bay Area, shut down indoor dining at his San Leandro taproom. Ever since, he and his staff have been working to make the indoor space safer.

“We spent a lot of time and money building partitions, getting air circulation, getting the right cleaning protocols in place, and training,” Freccia said.

A couple of weeks ago, the taproom finally reopened for indoor dining. But COVID-19 cases in the Bay Area have been rising, and last week, Alameda County shut down indoor dining.

“So we had exactly one week of indoor dining,” Freccia said. “And we were full every night.”

Freccia said the taproom still has outdoor dining, and the company sells a lot of beer to grocery stores. But he said other restaurants won’t be as lucky as restrictions ramp up.

“It just seems clear, especially with the rollbacks that are happening all over the country due to the increase in COVID cases, that there needs to be an additional aid program,” Freccia said.

Without another round of something like the Paycheck Protection Program, which kept a lot of businesses afloat during the pandemic’s early stages, the outlook is bleak for some restaurants.

Bobby Jones is the chef and co-owner of the Point, a crab house on Chesapeake Bay in Maryland. Friday, his county cut indoor dining capacity in half, to 25%.

But Jones said he and his wife, Julie, who co-owns the restaurant, had no choice but to let some workers go last week. Julie Jones said it’s harder to lay people off now than it was earlier in the year, when workers could fall back on a $600-a-week federal top-up to state unemployment benefits.

“I’m worried now because that $600 isn’t there,” she said. “It’s not an easy decision to make of who you keep, and who you have to lay off first, and in what order they go.”

Without any relief in the pipeline, some restaurant owners are revamping their business models in an effort to survive.

Kevin Takarada is the owner and founder of MakiMaki, a sushi restaurant in midtown Manhattan. Two weeks ago, he added shabu-shabu to his menu. It’s a type of Japanese hot pot that also helps keep customers warm inside the restaurant’s outdoor tents.

“People are not going to sit in 30-, 40-degree weather outside just because it’s covered in plastic and eat a sushi roll,” Takarada said. “I just don’t think that market exists.”

Takarada said the midtown office workers his restaurant normally serves have started to return. But he’s worried about what might happen, now that New York City’s schools are closed again.

“Parents can’t leave to go to work anymore,” Takarada said. “They have to go back to remote working.”

Takarada said he’s hoping for another round of Paycheck Protection Program money, but he knows he can’t depend on it.