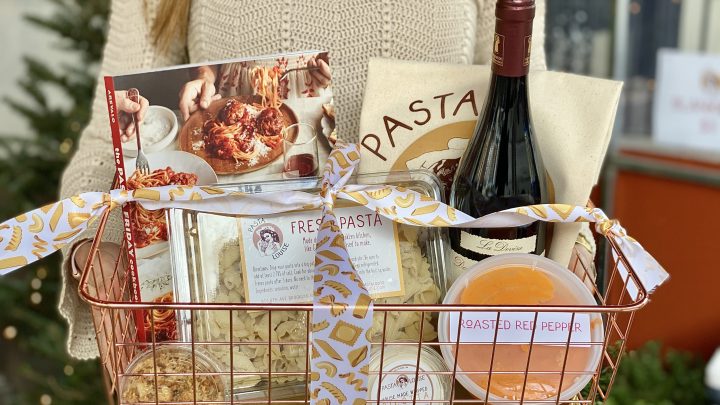 COPY
A Pasta Louise holiday gift basket. "I feel like my mind is just always kind of thinking about ways to keep people out and supporting us for the winter," says owner Allison Arevalo. Allison Arevalo
Back to Business

A Pasta Louise holiday gift basket. "I feel like my mind is just always kind of thinking about ways to keep people out and supporting us for the winter," says owner Allison Arevalo. Allison Arevalo
Listen Now

As of Monday, Dec. 14, indoor dining is banned again in New York City restaurants because of rising COVID-19 numbers.

That leaves restaurants in New York, as in other places, with only outdoor dining, which will be tricky as the weather gets colder.

Allison Arevalo owns a restaurant in Brooklyn called Pasta Louise. She kept a weeklong diary for us, as she, like many restaurant owners, faces yet another seismic change in the industry.

Pasta Louise is located in Park Slope, Brooklyn. It’s named after Arevalo’s grandmother, who taught her how to cook, and it serves mainly fresh pasta, topped with things like meatballs and spicy red pesto. The seating is all outdoors, under heated awnings.

On the Sunday after Thanksgiving, Pasta Louise hosts an event for kids. They make Christmas ornaments from dried pasta and red glitter. It’s 40 degrees outside, but Arevalo is hopeful that a bunch of kids will show up — and that their parents buy a lot of hot chocolate and egg sandwiches.
The event goes well.

On Monday, the restaurant is closed. Tuesday, business is slow.

Wednesday morning, Arevalo wakes up thinking about gift baskets. The restaurant is selling them for the holiday.

“I feel like my mind is just always kind of thinking about ways to keep people out and supporting us for the winter,” she said.

Later on Wednesday, business is so slow that she sends one of her servers home. She worries that she might have to lay off some of her 28 employees.

The rest of the day isn’t much better. But as she’s about to bike home, she sees some of the restaurant’s regulars sitting outside, and it lifts her mood.

“One of them stopped me and told me to be careful because I wasn’t wearing my helmet,” she said. “And another guy was asking me what are we doing for Christmas platters, because he really likes meat and he wants a platter with more meat in it.”

Things start looking up by Thursday night — the restaurant actually has a waitlist. Same thing on Friday and Saturday. The restaurant also gets a ton of takeout orders.

On Saturday, Arevalo said that as long as New York doesn’t also ban outdoor dining, she thinks Pasta Louise can make it through December.

“The real challenge is going to be January and February,” she said, walking in the door to see her family after a long week. 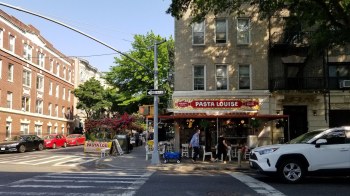