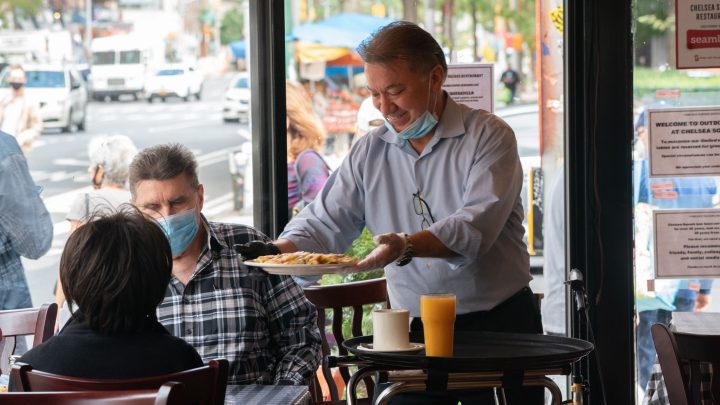 It’s an autumn evening in New York right out of the movies — trees changing color and people walking by wearing scarves. But at La Locanda in Brooklyn, the silence is heavy. There’s only one patron, eating outside. Owner Cono Colombo is worried. “We don’t make no money. We just go day by day,” he said. “That’s the only thing you do. But you can’t put no money on the side.”

It’s been about three weeks since New York City restaurants got approval to serve diners indoors, but only at 25% capacity. If infections are under control, that could expand. But with case numbers creeping up, dining could get shut down again when the state takes another look next week.

Colombo says outdoor seating and a PPP loan saved La Locanda this summer. But no one wants to eat their linguini della nonna while chattering their teeth in New York winter. And Colombo says he has little faith in outdoor heaters helping.  Inside, under state rules, he can only fit about 4 people at a time. So he worries customers might go somewhere bigger, instead. Plus, it’s going to cost him more to make it safe for those four people. “Now we gotta have an extra person to sit out by the door to take the temperature. You gotta clean twice. You gotta do so many thing. How do you survive like that?”

A lot of restaurants haven’t even survived this far. According to Yelp data, over 32,000 restaurants across the country have closed since the pandemic.

Guy Kairi owns Concord Hill restaurant and has been taking earnings from his foie gras and truffle terrine to make his indoor space safer. But he says, “the obvious truth is people don’t want to sit inside yet. Even though we complied with installing new filters, and the light in the AC that kills whatever.”

Kairi says he has about 30% fewer customers since it started getting cool. He’s brought in a group of contractors to talk about heating and expanding his sidewalk dining areas.

Like Colombo, Kairi says what really kept him afloat this summer was a PPP loan. “Every week that goes by, you’re just digging a hole that you’re not going to be able to recover from,” he said. “Right now, we need a second PPP to be passed so I can keep employees, and keep paying rent, and not have to beg to the landlord, to the purveyors. “