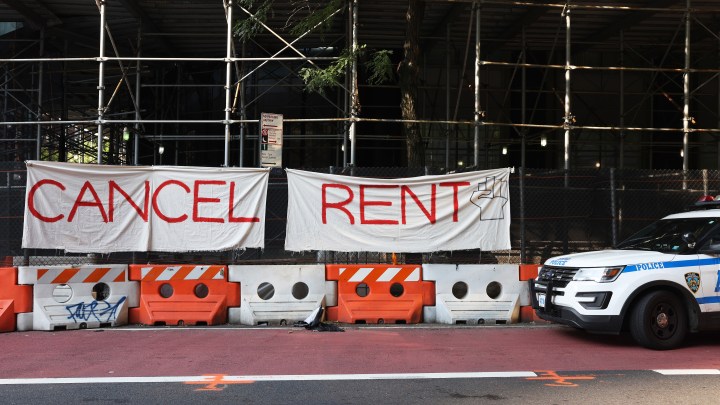 We got a whole cornucopia of economic indicators today ahead of the Thanksgiving holiday. Some of those numbers are worth being thankful for: Durable goods orders were a little stronger than expected, along with new home sales and consumer spending.

Other indicators were not so great. There were more initial jobless claims than expected. All in all, more than 20 million Americans filed continuing claims for unemployment during the first week of November.

And starting about a month from today, those Americans will be hurtling over a fiscal cliff that is going to play havoc with their personal economies.

Between Christmas Day and the end of the year, a whole slew of government relief programs put into place to help Americans through the pandemic are coming to an end, with no extension in sight.

An estimate by The Century Foundation found that when those programs expire, the economy will lose about two-and-a-half billion dollars a week. And 12 million Americans will lose their benefits.

In normal times, that would force them to rely on non-cash relief. But some of those programs are going away too.

Ever since May, the Agriculture Department’s been running its Farmers to Families Food Box Program, where farmers package up meat, dairy and vegetables for distribution to people who are facing food insecurity during the pandemic. So far it’s delivered around 120 million boxes — roughly $4 billion worth of food.

But that program’s set to expire at the end of the year, too.

In the meantime, food insecurity isn’t going anywhere. It affected around 35 million people before the pandemic, according to the USDA. The nonprofit Feeding America found that the COVID-19 crisis could make that number rise to more than 50 million.

Right now, landlords nationwide cannot evict people who haven’t been able to pay their rent during this crisis — thanks to an eviction moratorium put in place by the Centers for Disease Control and Prevention. That moratorium ends on Dec. 31.

Some estimates have found that between 7 and 14 million people will be at risk of eviction when that happens. The National Low Income Housing Coalition estimates that the cost of evicting these people and the toll on social services could end up being $130 billion.

Some cities and states have their own eviction bans in place, but others have let theirs expire.

Throughout the pandemic, people with federal student loans haven’t had to make payments. And interest hasn’t been accruing on those loans. All of that ends on Dec. 31, putting tens of millions of people on the hook for payments.

A couple other deadlines are coming up at the end of the year. Expanded tax credits for small businesses, so they can provide their employees with paid sick leave, will expire. And state and local governments have until the end of the year to spend federal money earmarked for COVID-19 expenses.