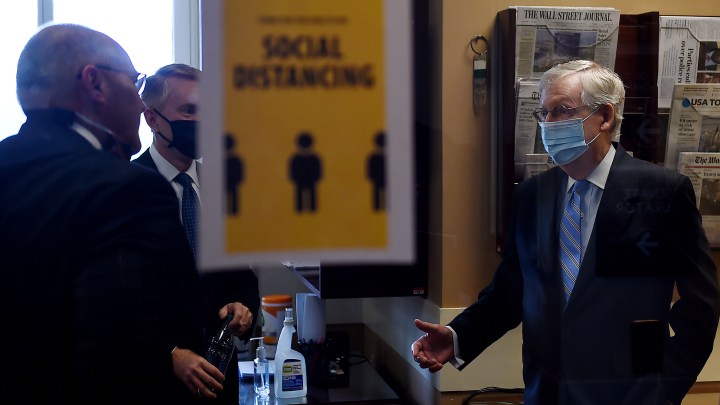 Senate Republicans are expected to roll out another COVID-19 relief package proposal this week. The House has already passed a new $3 trillion relief bill.

Marketplace’s Nancy Marshall-Genzer is following this news. The following is an edited transcript of her conversation with Marketplace’s Sabri Ben-Achour.

Nancy Marshall-Genzer: The Senate bill will probably have a smaller price tag, probably around $1 trillion. Senate Republicans are also expected to insist on some liability protections for businesses to protect them from lawsuits if workers or customers get COVID-19 and blame the business owner. President Trump also says he wants the legislation to include a payroll tax cut.

Ben-Achour: And what about the extra $600 a week in unemployment payments workers are now getting?

Marshall-Genzer: That’s a big stumbling block. It’s scheduled to expire at the end of this month. Democrats want it to continue, maybe for the next six months. But Republican leaders say some people are making more money from unemployment than when they were working. They see the $600 as a disincentive to return to work. Democrats say there aren’t enough jobs for all of the unemployed workers right now, and if the extra money were cut, it would cause great financial hardship.

Ben-Achour: Are there any compromises on the horizon there?

Marshall-Genzer: Possibly. Republicans might be willing to continue with a smaller unemployment subsidy. There’s also talk about giving people who return to work a bonus. Treasury Secretary Steven Mnuchin has said any new subsidy would be no more than 100% of a person’s lost wages.