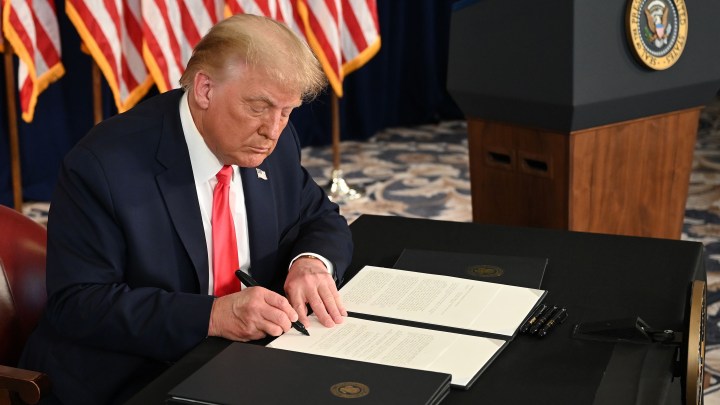 President Donald Trump signed actions over the weekend aimed at restarting some pandemic relief, including a limited ban on evictions and $400 extra a week in unemployment benefits. But will that aid actually reach people?

The move comes after talks with congressional Democrats over wide-ranging pandemic relief legislation broke down.

Trump directed federal agencies to send $300 dollars in weekly aid, taken from the federal disaster relief fund, and called on states to provide an additional $100.

Matthew Lawrence of Emory University, a scholar of legislative appropriations, said that all four presidential actions are a mere shadow of what negotiators were considering.

“The roadblock is the limitations on presidential power, and the fact that our Constitution relies on Congress to make decisions about taxing and spending,” Lawrence said.

So while Trump can spend some money, he’s very limited in how. Calling on states to implement new unemployment programs, as Trump’s executive action has done, is unlikely to be practical, Lawrence said.

Of the other actions, he said that one has the potential to offer some immediate help, and that’s the further deferring of student loan payments.

Correction (Aug. 10, 2020): Previous versions of this web and audio story mischaracterized the types of actions signed by the president. They have been corrected.