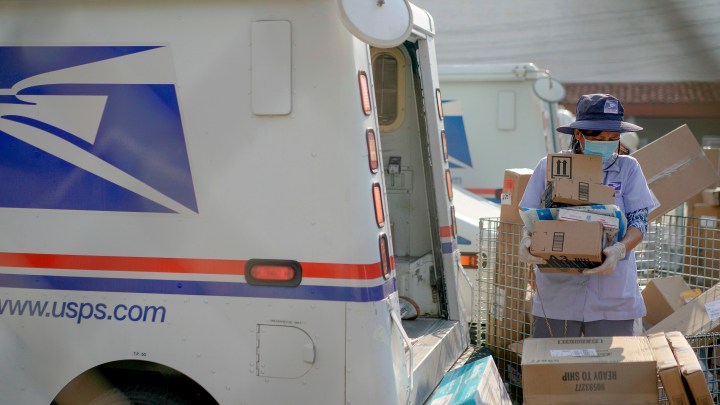 COPY
A postal worker loads packages into a mail truck outside a USPS center in Los Angeles, California, in August. Kyle Grillot/AFP via Getty Images
COVID-19

A postal worker loads packages into a mail truck outside a USPS center in Los Angeles, California, in August. Kyle Grillot/AFP via Getty Images
Listen Now

The Black Friday tradition of hordes of crazed shoppers storming big-box stores has become more subdued in recent years as shopping increasingly moves online. This year, as the pandemic surges, the trend will only intensify, causing an unprecedented volume of packages that need to be delivered.

The good news is we’ve had a bit of a dress rehearsal, said Adie Tomer, a fellow at the Brookings Institution Metropolitan Policy Program.

“Amazon was the great example where they had holiday-level crush in the spring,” he said. “But they got it under control through a mix of investment and learned expertise.”

The shutdowns early in the pandemic caused a sudden surge in e-commerce that no one had anticipated, leading to big delays. Since then, retailers and package carriers have been preparing, staffing up and building new fulfillment centers.

But that may not be enough, said Satish Jindel, president of shipping software company, ShipMatrix.

“People who are expecting packages should be prepared that many more of them this year will take a day or two days longer,” he said.

ShipMatrix estimates the demand for shipping will exceed capacity by about 7 million packages a day — about three times as many as last year.

FedEx and UPS have limited the volume of packages they take on to keep on-time performance up. So much of the overflow will end up with the United States Postal Service, said Gordon Glazer, a senior consultant with Shipware.

“Unfortunately, the Postal Service doesn’t have the ability to limit packages or volume and have become the de facto carrier of last resort,” he said.

USPS, which is a Marketplace underwriter, is still recovering from slowdowns over the summer, though on-time performance has improved.

“Many retailers have been promoting early to try to push some of that demand forward,” he said. “But there will be early cutoffs to get deliveries in time.”

Brown said consumers who don’t get their orders in by Dec. 15 could end up with some empty space under the tree.