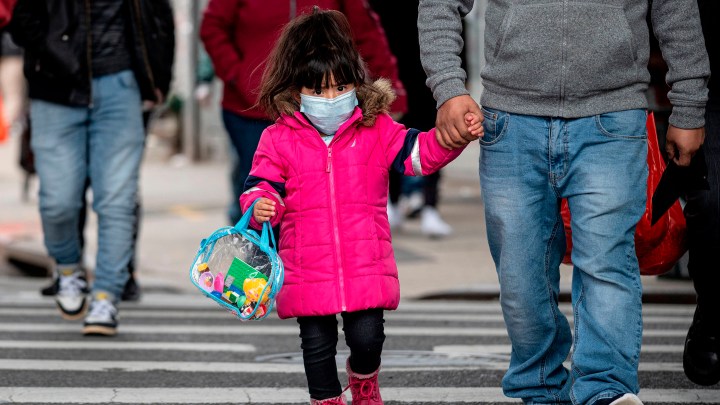 COPY
OECD chief economist Laurence Boone says children whose schooling has been affected by COVID-19 are among those likely to be "scarred" long-term. Johannes Eisele/AFP via Getty Images
COVID-19

OECD chief economist Laurence Boone says children whose schooling has been affected by COVID-19 are among those likely to be "scarred" long-term. Johannes Eisele/AFP via Getty Images
Listen Now

Global economic growth may return to pre-pandemic levels in 2021 as distribution of a coronavirus vaccine becomes widespread. But the ongoing recovery will be uneven in some parts of the world, according to new analysis from the Organization for Economic Cooperation and Development.

The 37-member organization says the the pandemic has increased inequality for low-skilled workers, young workers preparing to enter the labor market and service sector employees who’ve lost their jobs as a result of virus-related restrictions.

OECD chief economist Laurence Boone says the ongoing recovery will be uneven in some parts of the world and among different populations. The following is an edited transcript of her conversation with the BBC’s Victoria Craig on the global edition of the “Marketplace Morning Report.”

Laurence Boone: We’re still in the worst of the pandemic. And I understand people may not feel like that … with vaccines in sight, we’re indeed having hope. This year, where we’re still in some lockdown, we project the [global] economy will contract by about 4%. But with vaccines progressively deployed, better health policies throughout 2021 and provided governments sustain their fiscal support, we should see a recovery that would bring the world back to 4% growth in 2021.

Victoria Craig: But distributing this vaccine will have uneven economic effects across the world, won’t it? It will get some economies going again, while weakness and global demand will continue to sort of drag on growth in other places.

Boone: So I think what you’ve just said is super important. The way we look at 2021 — you’re in the middle of a fight, of a battle, and you see the cavalry arriving, you just don’t stop fighting. You fight even more until the cavalry arrive, and after, and that’s exactly how we should look at health policies and fiscal support. We have to double down on government support, not only on public health and vaccines, but also on support to keep firms alive, people in jobs, so that we can navigate through this period until the vaccine is widely deployed with the minimum damage to workers, to vulnerable people and even to the children.

Craig: How do you factor in some of these permanent changes to the way the economy has evolved through this? For example, the new ways of working that lead to fewer coffee shop visits or lunches out? What kind of lasting impact will that have on the global economy?

Boone: So I think at this stage, it’s very difficult to have one design about the world of tomorrow. What we’re really concerned with right now is those who are actually most likely to be scarred for long, and that’s the young people accessing the labor market for the first time, it’s the kids in less-favored neighborhoods who have missed school and run the risk of missing the entire studying life. It’s also low earners. A lot of them are not fully employed, and prospects have been devastated.

Craig: Do you think policymakers are doing enough to provide that support?

Boone: Well, I think that it was quite blatant with the crisis that there wasn’t enough for health policy, there wasn’t enough for education. So what we must do now is address that, not only on the income support, but also on the digital [access and capabilities]. Digital for low-income workers, so that they can work more for home, as well, so they can get the training they need. Digital for the kids, right? Professors are not equipped, schools are not equipped, kids are not equipped. We need to address this and plant the seed of a better world for tomorrow by addressing inequality today.

Craig: Still, though, a common argument against more government spending is the now record high levels of public debt that governments have accrued. The difference in this economic environment is that the cost of that debt is also at a record low.

Boone: That’s something I would like to make really clear. It’s not that we don’t care about the debt, but it’s not the right time to look at how high it is, as you’ve just said, for a couple of reasons. The first one is we need this support to avoid long-term scarring effects. We need to keep up with firms and with people. And the second, as you noticed, and this is something that we pointed out, that the cost of getting indebted is much lower than what it was in the wake of the financial crisis. So for the moment, that is sustainable, and we should keep on going until we get the recovery. Once we’re there, it will be time to look at the size of the hole.