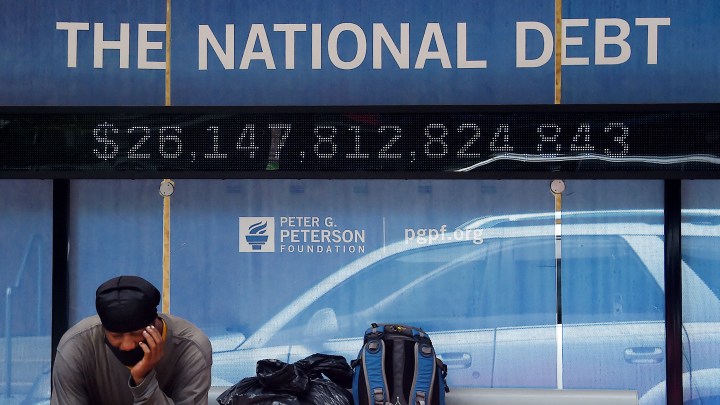 COPY
A national debt counter from mid-June. The U.S. is approaching a position it has not seen since World War II, as the amount of government debt is on pace to exceed the size of the nation's economy. Olivier Douliery/AFP via Getty Images

A national debt counter from mid-June. The U.S. is approaching a position it has not seen since World War II, as the amount of government debt is on pace to exceed the size of the nation's economy. Olivier Douliery/AFP via Getty Images
Listen Now

The last time the U.S. federal deficit was this high, as a percentage of the total size of the economy, was 1946. The debt-to-GDP ratio was 119%.

There’s news that amid the pandemic the amount of government borrowing this year is approaching 100% of the total economy. And it’ll go higher if there’s a new stimulus package.

But we survived 1946. So is it really a problem? Robert Bixby is executive director of the Concord Coalition, a nonpartisan organization that focuses on the government’s tendency to borrow money to pay its bills. He spoke with “Marketplace Morning Report” host David Brancaccio and the following is an edited transcript of their conversation.

David Brancaccio: So, we owe a ton of money — what is it, World War II levels of debt now?

Brancaccio: I mean, at one level, it makes a lot of sense to spend during a terrible crisis here. That spending might lead to getting back to growth quicker that would generate the tax money to help the government pay this off.

Bixby: Well, it does. And, actually, playing against type, I am a budget deficit hawk. But you don’t need to worry about the budget deficit in the short-term when you’ve got an emergency like, for example, World War II, or the pandemic. So I look at the the real problem here is the underlying trend in the budget, which was already on an unsustainable track, and we had very high levels of debt and deficit relative to what we usually have before the pandemic began. So the pandemic exacerbated that situation. But we had to respond. What I worry about in these budget numbers is not so much the huge spike in debt in the very short-term, but the fact that our budget deficit is on a long-term track that’s unsustainable.

Brancaccio: This issue with the debt sometimes seems a little abstract to people. But, you know, to really bring it home, if we are serious about paying this off, the deficit of the scale we’re talking about now — well, to you, does it signal that higher taxes will be ahead?

Bixby: I think so. I think that in order to get the budget on a long-term sustainable track, we’re going to have to look at spending, which is growing as our population ages and many of the most popular largest programs, like Medicare and Social Security, push up spending over the long term. We’re probably not going to be able to get by with the same level of revenue that we’ve been used to. So really, one of the things Congress is going to need to look at after the pandemic is spending reductions, but also some way of raising revenue in a way that doesn’t interfere too much with economic growth.

Brancaccio: Do you and your colleagues at the Concord Coalition feel, I don’t know, lonely in your quest to highlight this issue of government borrowing and deficits? I mean, Democrats and Republicans, with some exceptions, don’t seem to care very much.

Bixby: No, they don’t. I’ve noticed that. And so, yeah, I think it’s very, very important to be talking about this. I think it’s important for younger people to understand that this is a burden that they’re going to have to live with for a long time. And it’s going to affect their choices, their economic opportunities. So, yes, I think that both sides have pretty much given up on deficits for right now. OK, they have an excuse for the pandemic, but really, over the longer time term, both sides need to get back to this.