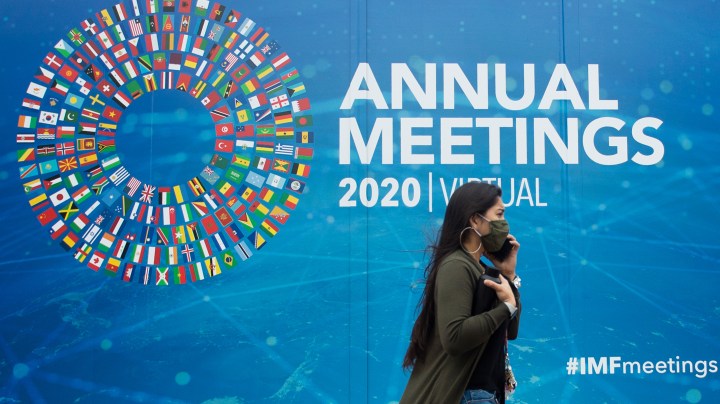 COPY
A woman walks past a promotional poster for the virtual 2020 International Monetary Fund annual meetings, outside their headquarters in Washington, D.C., on Oct. 13, 2020. Andrew Caballero-Reynolds/AFP via Getty Images
COVID-19

A woman walks past a promotional poster for the virtual 2020 International Monetary Fund annual meetings, outside their headquarters in Washington, D.C., on Oct. 13, 2020. Andrew Caballero-Reynolds/AFP via Getty Images
Listen Now

The IMF is projecting global growth will contract by more than 4% this year. That’s slightly better than its June forecast, but still pretty grim.

For now, the IMF said all countries, not just the U.S., should stop worrying about their debt and spend what is needed to keep their citizens above the poverty line.

The IMF says close to 90 million people could fall into extreme poverty — living on less than a $1.90 per day — as COVID-19 widens the global wealth gap. Eric LeCompte heads Jubilee USA Network, a coalition of aid organizations. He said people on the lowest rungs of the economic ladder — migrant workers and low-skilled factory workers — are most at risk.

“We are looking at perhaps half the world’s population living in extreme poverty,” LeCompte said.

The solution, according to the IMF, is that countries should borrow and spend big to strengthen the social safety net. That means health care coverage, unemployment benefits and job retraining.

Ben May, director of global macro research at Oxford Economics, said that government spending can be a lifeline. “I think there is an understanding that at the moment, fiscal policy is particularly powerful, and it does play a role in lifting these economies out of recession,” he said.

Plus, borrowing is cheap right now: Interest rates are super low. But developing countries that borrow should remember they’ll have to pay it back.

“It will be incredibly difficult for industrialized countries to be able to waive off those debts and just to say ‘You don’t need to pay us back,'” said Shihoko Goto, deputy director for geoeconomics at the Wilson Center.

But countries that borrow from the IMF are getting a bit of a reprieve. The IMF has decided to give them more time to repay their debts.