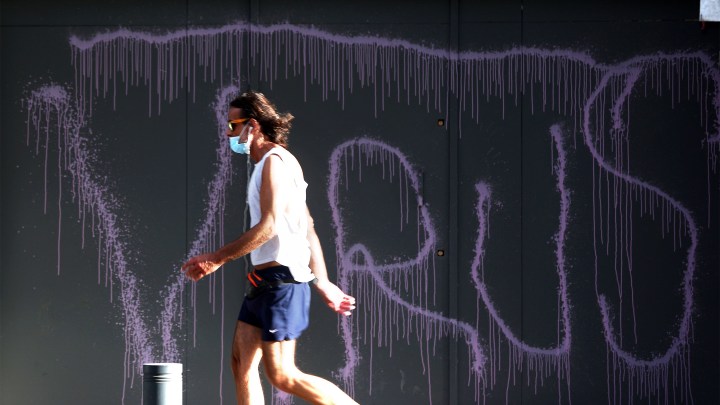 COPY
A man passes graffiti about the coronavirus in Beirut, Lebanon. The IMF is predicting a world-wide downturn of 5% as people spend less money while stuck at home due to COVID-19. Patrick Baz/AFP via Getty Images
COVID-19

A man passes graffiti about the coronavirus in Beirut, Lebanon. The IMF is predicting a world-wide downturn of 5% as people spend less money while stuck at home due to COVID-19. Patrick Baz/AFP via Getty Images
Listen Now

The International Monetary Fund Wednesday released a pretty downbeat economic forecast. It expects a nearly 5% contraction in global GDP this year — that’s 2% worse than the fund previously estimated. A number like that can sound a little abstract, especially on a global scale, so what does it look like?

Well, the world economy contracted by less than 1% in the Great Recession of 2008 and 2009. Ken Rogoff, professor of economics at Harvard and former chief economist at the IMF, said a 5% global contraction is “like a meteor hitting the earth. It is a massive number.”

The IMF said the global economy will contract as people around the world spend less because they’re stuck at home. Business activity will drop. And that means hundreds of millions of lost jobs — especially for low skilled workers.

Meanwhile, government debt will rise as countries borrow to prop up their economies.

“Everything from hunger, to lack of access, to any kind of assistance from the health system — those kinds of problems are going to be way more acute in the emerging world,” Mallaby said.

A country’s case numbers will also affect how much pain a 5% contraction causes.

Jay Bryson, managing director and the chief economist for Wells Fargo’s Corporate and Investment Bank, said in Europe, cases aren’t rising like they are in the U.S.

“Later this year, depending on how things evolve here, Europe could potentially be growing faster than the United States,” Bryson said.

The IMF projects that the U.S. economy is likely to fare even worse than the global one.