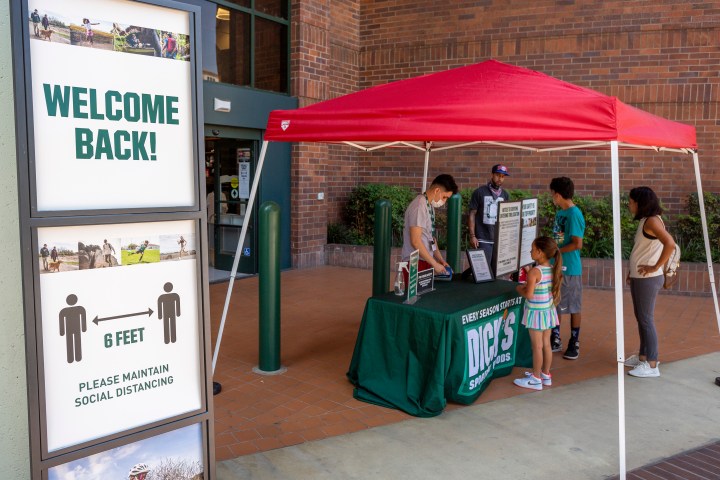 COPY
Masks and hand sanitizer are given to customers entering a Dick's Sporting Goods during the pandemic. "The holiday season is going to look very different for retailers and workers alike," one economist says. David McNew/Getty Images
COVID-19

Masks and hand sanitizer are given to customers entering a Dick's Sporting Goods during the pandemic. "The holiday season is going to look very different for retailers and workers alike," one economist says. David McNew/Getty Images
Listen Now

Amazon announced Tuesday it will be looking to hire another 100,000 workers this holiday season. That’s on top of the nearly 200,000 additional workers brought on earlier this year to help with the surge of e-commerce buying. The pandemic has changed the way Americans shop and what they shop for. And that is changing the way retailers are hiring for the holiday season this year.

Luke Walker is a seasoned seasonal retail worker. He’s been on the floor at a Dick’s Sporting Goods in St. Louis helping herd deal-crazed customers during previous Black Fridays.

“People were a little testy just trying to make sure they get the good deals,” he said.

This year, he’s avoiding the crowds with a night job in a big-box store.

“Basically, I’m just an order picker,” he said. “I go around the store, find the items that they’ve ordered and then package them.”

Going from the sales floor to the stockroom is emblematic of changes in the pandemic holiday economy, said Daniel Zhao, an economist with job site Glassdoor.

“Christmas isn’t canceled, but the holiday season is going to look very different for retailers and workers alike,” he said.

He found hiring for seasonal and retail jobs is down 8% overall on Glassdoor.

But AnnElizabeth Konkel, an economist with job site Indeed, said hiring in some parts of retail is stronger than ever.

“One that is doing particularly well is loading and stocking,” she said. “That can mean warehousing jobs, that can also mean back-of-store stocking shelves and stores.”

Those jobs tripled compared to past years, and there are now more warehouse jobs in the United States than before the pandemic. That has pushed up wages in the sector despite high unemployment, said Andy Challenger, senior vice president of staffing firm Challenger, Gray & Christmas.

“The competition for workers that have the technical expertise and the capacity to work in a warehouse is really intense,” he said. “There’s a lot of people that have left the labor market for fear of catching the COVID-19 virus.”

Many parents have also dropped out of the labor market in order to care for kids at home. These factors are also driving a spike in seasonal work-from-home jobs, said Sara Sutton, CEO of FlexJobs.

“We’re seeing a lot of activity around customer service because of the increase in online ordering,” she said.

The Gap and Williams Sonoma have made a big push for remote roles. They’ll still have to handle deal-crazed customers, but not the endless loop of in-store holiday music.