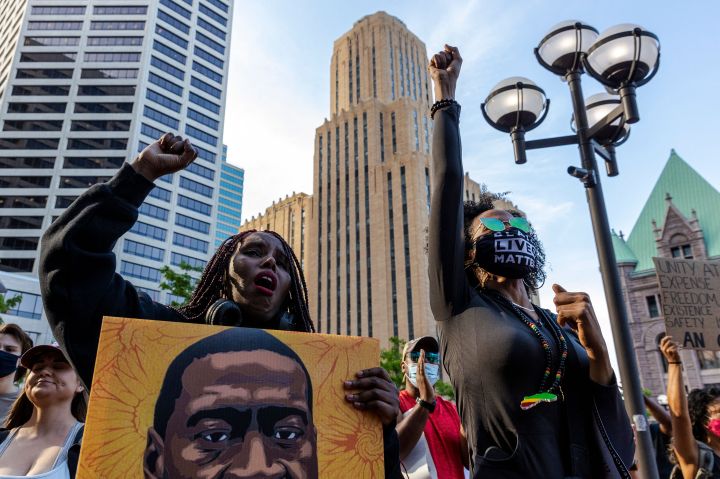 COPY
"There's a padlock on the front door of the federal courthouse for victims of police brutality," said Marc Morial of the National Urban League Kerem Yucel/AFP via Getty Images
Race and Economy

"There's a padlock on the front door of the federal courthouse for victims of police brutality," said Marc Morial of the National Urban League Kerem Yucel/AFP via Getty Images
Listen Now

Today marks one year since George Floyd was murdered by a police officer in Minneapolis, Minnesota. Where does legislation to change policing in the U.S. stand in Congress?

Marc Morial, president and CEO of the National Urban League, spoke with “Marketplace Morning Report” host David Brancaccio. The following is an edited transcript of their conversation.

David Brancaccio: President [Joe] Biden wanted a police reform bill passed by today. Now, it’s not going to happen by today, but what are you hearing — will it happen soon? Very soon? What do you think?

Marc Morial: Let me characterize it this way: It needs to happen. It must happen. It’s what the nation needs. If you look at the George Floyd Justice in Policing bill and you look at its specific provisions, each of them has strong support — greater than majority support amongst the American people. The question is, will the Republican side of the Congress, the Republican side of the Senate, recognize that this is bigger than partisan politics? This is about justice. It’s about racial justice. And it is about ending this growing pandemic of unarmed Black people being killed by the police for no reason. It is corrosive, divisive and damaging. So we all wanted a bill yesterday. We wanted a bill last week, last month. We wanted a bill last year. But I’m committed, as I think many of us are, to work for a meaningful bill, a substantial bill. This is not a moment for the proverbial lipstick on a pig or to put a fedora on an alligator. This is a moment for a strong, meaningful bill. And that’s what we need to have.

Brancaccio: Part of this is “qualified immunity” for police officers, which exists now. Officers can’t be sued, in many situations, personally for their actions. That’s a sticking point with the Republicans, who want to keep this form of protection from prosecution. There’s talk of a compromise with making it easier to sue police departments. That’s already possible. What do you think?

Morial: In the federal system, qualified immunity works in conjunction with a doctrine called the Monell doctrine, which stems from a case of many years ago, such that the victim of police brutality, whose constitutional rights are violated, has no redress in the federal courts. No meaningful redress. What this is about is ensuring that a victim of police misconduct, a victim of police brutality, the survivors of an awful death at the hands of police in an unjustified fashion, have recourse in the federal system. That’s very American. That’s basic due process. And the way qualified immunity and the Monell doctrine operate now, it is as though there’s a padlock on the front door of the federal courthouse for victims of police brutality. This is a must if victims, if people whose constitutional rights are violated, are going to gain a measure of respect, a measure of dignity and meaningful access to the federal courts. What I find is that when people understand qualified immunity and the Monell doctrine, they fundamentally don’t support it — the idea that anyone can violate another person’s constitutional rights and somehow get away with it because there’s no recourse. There’s no way to even have a trial or a hearing or an opportunity for your side to be heard. We have to end this absurdity, which is really a relic of many, many decades ago, and bring the law and the jurisprudence into the 21st century.

Brancaccio: You don’t think there’s a road forward here if the focus were making it easier to sue the institutions, say, the departments or the cities?

Morial: I think suing the institution is better for the victims than responsibility for the individuals. But in that instance, there has to be, I think, meaningful change on the criminal law side to allow the very same officers who violate a person’s constitutional rights to be held accountable in a criminal proceeding in the federal courts. The two go hand in hand. It’s about, on one hand, holding the individual police officer accountable. And that can be done through disciplinary proceedings, in some instances, and in more severe instances through criminal proceedings. But it’s secondarily — I think you’re right — it’s about giving the victim recompense or an opportunity to seek compensation through the civil proceeding. And that certainly is best if the municipality is responsible. So to fix this, it’s going to require both a mechanism to ensure that victims have a pathway against a municipality, a sheriff’s department, a state police department, and also that an individual police officer whose conduct rises to the level where it really violates the constitutional rights of a citizen — where they’re beaten unnecessarily, where they are brutalized unnecessarily — that there’s a pathway to hold that officer personally accountable in the criminal law. So there’s a way to detangle this complex web of denial of rights. Because what you’re really talking about here is special protections for police officers beyond what the military has, beyond what anyone really has. And I think that is antiquated. I think it’s caused more of a problem. It’s disincentivized reform. And we have got to change it.

Brancaccio: A related thing: About a year ago, you and I talked about how insurance companies that insure towns and police departments are becoming a force for changing policing. The insurance companies don’t like paying out settlements, and sometimes they press for change. It’s kind of an internal irony because the fact that insurance exists can take away the sting of a police department if it allows officers to do the wrong thing.

Morial: I would say, if you probably did fairly extensive research, you would find that many cities with poor records are not insurable, that they will not be able to find an insurance company that will write a policy to protect them. But look, insurance is a standard risk-management tool for corporations, for universities, for cities, even for small businesses. And insurance, trying to reduce claims by encouraging reforms and practices and procedures, happens all the time. And I think we need, by any and every means necessary, with every tool available, to reform, re-imagine and reenvision policing. That’s really what this is about. This is about a re-imagination in a reenvisioning of policing. This is not a case of a few bad apples. If this was a case of a few bad apples, these problems would occur every once in a while. Not every year. Not every month. Not on a consistent basis for decades.

Brancaccio: For decades, right? I mean, how often are we seeing these headlines in the news even these days?

Morial: Decades and decades. And let’s acknowledge this fact: The advent of technology, of body cameras and dash cameras and iPhones with video-recording capabilities, has created new awareness and new transparency. Whether it’s Ronald Green or George Floyd or many of these instances, 20 years ago, they were not captured on camera. And because they were not captured, we had a literal swearing contest about what occurs. Now with transparency, I say to people, believe your eyes, don’t believe the lies.