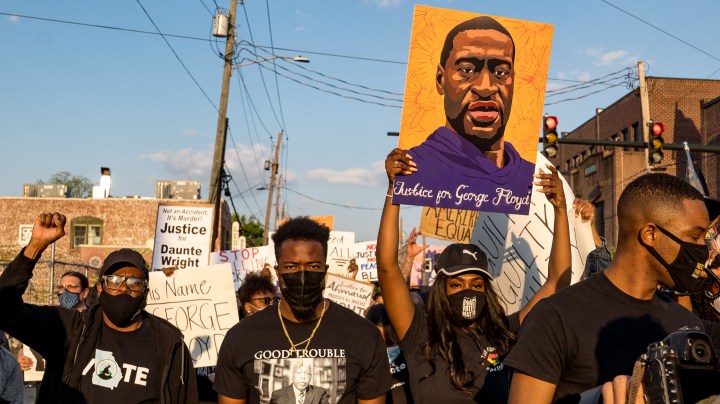 COPY
People march through the streets on April 20, 2021 in Atlanta, Georgia, after the guilty verdict was announced for the ex-cop who murdered George Floyd. Megan Varner/Getty Images
Race and Economy

People march through the streets on April 20, 2021 in Atlanta, Georgia, after the guilty verdict was announced for the ex-cop who murdered George Floyd. Megan Varner/Getty Images
Listen Now

With the conviction in Minneapolis of the police officer who murdered George Floyd almost 11 months ago, and the funeral tomorrow in the same city of Daunte Wright, a Black 20-year-old killed by a police officer, we check in on policy work and corporate pledges aimed at addressing systemic racism.

Marc Morial, president and CEO of the National Urban League, spoke with “Marketplace Morning Report” host David Brancaccio. The following is an edited transcript of their conversation.

David Brancaccio: A bill to overhaul policing in America got through the House of Representatives, but, I don’t know, it appears immobile in the Senate. Do you see prospects for unsticking that legislation?

Marc Morial: There is a pathway forward, but it requires a sense of — an understanding of how critical this moment is. And while the verdict in the Derek Chauvin trial is an important moment for justice, it does not do what is necessary to address systemic issues. So the George Floyd Justice in Policing Act, I know there are discussions that are ongoing being led by Sen. Cory Booker, Sen. Tim Scott, Rep. Karen Bass and a number of others that are seeking to find — but this bill is reasonable. It is the best chance that the Congress in the United States has to put a marker down, to create a framework at the federal level, for changing in policing.

But let’s be clear: A federal law alone, even a strong federal law, is not enough. The change that has to occur has to occur city by city, county by county, town by town, state by state. You’ve already had one state, Maryland, pass its own comprehensive police reform legislation over the objections and veto of the governor there. So this is a movement that’s being propelled not necessarily by politicians, but by grassroots activists, by people in communities and in some instances by police leaders themselves. I’ve talked to a number of police chiefs who want the George Floyd Justice in Policing bill. They want to run departments that have integrity and respect for the community, and a federal framework will help.

So there is a pathway forward. It’s just important, and this is a message to Republican members, to understand this moment in American history. And to be pro the George Floyd Justice in Policing bill is to be pro good policing in America, is to be pro good public safety in America, and it is not an attack on police. It is an effort to do what we do in this nation: Time after time, we see a problem, we see institutional failures, and we fix them.

Brancaccio: Something else I wanted to ask you about: There are companies that made big-dollar pledges to address systemic racism, including announcing money for Black-owned businesses. There was a flurry of this last June into July. Some companies swiftly got the money out the door; other companies are still getting their acts together on the pledges. Coming up on a year here, Marc, do you think there’s a need for more accountability or maybe monitoring pledges versus performance?

Morial: Well, I think each company, certainly. Because in many instances, some of these initiatives are philanthropic, but others are not philanthropic — they’re designed to inject capital into African American-owned and other businesses owned by people of color. And I think that when we get beyond the pandemic, the effect and the results of those investments will be easier for people to see and witness.

Secondarily, the new commitment by some foundations and some corporations, in my view, simply leveled the philanthropic playing field. The philanthropic playing field had been so unlevel, like so much of American life, that the important issue of accountability is whether many of these companies understand that a one-time commitment is not what we need in this country. We need a sustained commitment to eradicate structural racism, to build bridges in this nation, to eliminate disparities in health, education, economics. It’s going to take a continued sustained effort. That’s why, while the George Floyd Justice in Policing Act is important, while today I have a sense that yesterday, in Minneapolis, the justice system for this one time worked the way in which it should work, but so much more must be done. That’s the word for today, for Americans: exhale, breathe, the justice system worked in Minneapolis, but working one time is not what we seek. We seek a change that is long term, that’s systemic and that’s sustainable.

Brancaccio: So you’re in Minneapolis. How is the energy overnight?

Morial: We went to George Floyd Plaza, which is the location in front of the Cup [Foods] store where George Floyd was murdered, and the energy and the crowd, the sense of positive, positive energy, but also the continued commitment to change. And now here in Minneapolis, tomorrow there’s the funeral of Daunte Wright, so there’s yet another important case — another case where the actions of the police officer were videotaped, another case that cries out for a competent prosecution, another case that people will watch, here in Minneapolis, across the nation.

And I think the world watches this — as the world watched the George Floyd case, they’ll be watching Daunte Wright. I’ll be attending the funeral of Daunte Wright tomorrow as his family and friends and the community mourn the loss of a young man who did not need to die. This was an unnecessary death. So this pandemic of police killings, there have been a substantial number already this year across the nation. And George Floyd and the Derek Chauvin trial stand out, because yesterday we saw a strong prosecution, a fair-minded jury who relied on eyewitnesses and videotape to do their job.