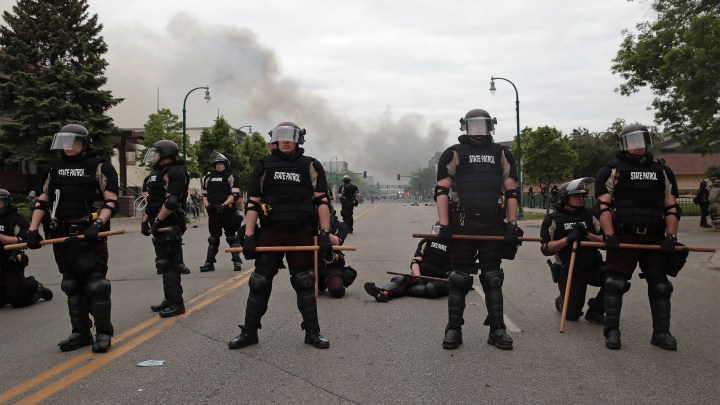 In Minneapolis, Los Angeles, New York and other cities, activists are calling for their city governments to cut police funding as a reform measure.

In a lot of cities, policing eats up a big chunk of the general fund. In L.A.’s latest budget proposal, it accounts for 54%. In Minneapolis, it’s about 36%. And cities are faced with cutting spending as tax revenue falls during the COVID-19 pandemic.

“In many cities, the only budget item that is not facing massive cuts is the police budgets,” said Andrea Ritchie, who researches the criminal-justice system at Barnard College. “We’re literally in the middle of the biggest economic crisis and the highest levels of unemployment of our generation. We’re in a pandemic without universal affordable health care.”

The argument is that those things should be the priority, and not policing. Advocates also argue that because the bulk of a police department’s budget goes toward salaries, if you cut budgets, you’ll have fewer patrol officers and fewer instances of police brutality.

“When you have more and more police officers in a community, research has shown it leads to more and more sort of conflict and interaction,” said Kumar Rao, director of justice transformation at the Center for Popular Democracy.

But this is an incredibly complicated topic. Simone Weichselbaum, a staff writer at the Marshall Project, has reported on policing for more than 15 years. She’s looked at what happened in cities that reduced their police budgets, like Memphis, Tennessee, which saw budget cuts and layoffs after the 2008 recession.

“What happened? They spent millions and millions of dollars on police overtime. And research shows that’s a recipe for disaster because you have cops who are overworked, frustrated, angry,” Weichselbaum said. “And that’s just a powder keg waiting to explode.”

Several people I talked to today said that training is one of the first things police departments would probably stop paying for.