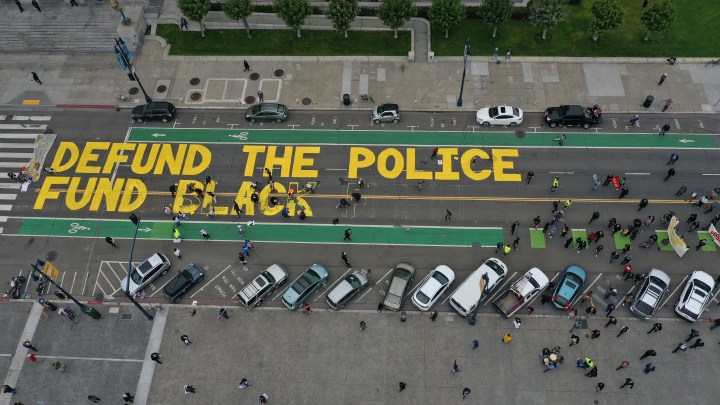 As a police officer in Georgia, Kalfani Turè said he spent a lot of time doing, what he calls, not really police work. “The barking dog next door, or the loud noise complaint. Many, many other cases” Turè said.

He’s not a cop anymore. Now, he’s an assistant professor of criminal justice and policing at Quinnipiac University. And he said for all the headlines Black Lives Matter and defund the police have gotten, we are still a long way from police reform.

“I would argue that if we’re not in the same space that we were in May 2020, we are worse off,” Turè said. He said the problem is that for most people, including policymakers, the conversation stops at cutting police funding.

“We’ve said defund, but we haven’t emphasized the other component, which is to refund, or to fund, community programs,” he said.

Since the murder of George Floyd one year ago, more than 20 big cities have reduced police budgets in some form and used the money to try to support communities in other ways.

At the end of the day, “defund the police” measures are about a reallocation of scarce municipal resources, but there’s a reason activists stuck with “defund,” said Stephen Rushin, a law professor at Loyola University Chicago.

“Yeah, that phrase, ‘a reallocation of scarce municipal resources,’ is not going to fit on a piece of poster board or be a really persuasive political campaign topic,” Rushin said.

The language incites a reaction. Some Americans react negatively to the phrasing “defund the police,” and different communities and people in them feel differently about the police. The racial element of the debate can’t be ignored.

But Rashawn Ray, a sociology professor at the University of Maryland, said the fact that people are even talking about city budgets is a good thing.

“People are now starting to realize the control they have as taxpayers and voters to dictate how their money is used,” Ray said. “And for law enforcement that really hasn’t ever been done before.”

He said for many years it’s been a given that every year, local budgets would allocate more money for police, especially in places that are seeing population growth, and part of the success of the “defund” movement is that’s not a given anymore.