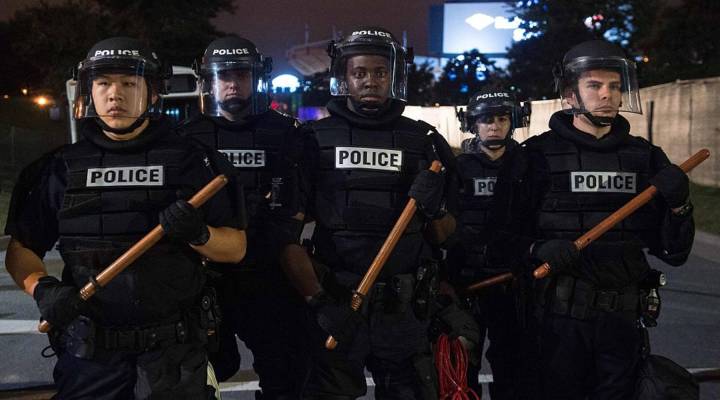 COPY
Riot police block off a ramp to a highway during a demonstration against police brutality in Charlotte, North Carolina, on September 22, 2016 following the shooting of Keith Lamont Scott by police two days earlier and two nights of riots. Nicholas Kamm/AFP/Getty Images

Riot police block off a ramp to a highway during a demonstration against police brutality in Charlotte, North Carolina, on September 22, 2016 following the shooting of Keith Lamont Scott by police two days earlier and two nights of riots. Nicholas Kamm/AFP/Getty Images
Listen Now

Update June 3, 2020: Across the U.S., protesters marching against police brutality and systemic racism are being met with police officers — in many instances — using military grade equipment. The increased militarization of police departments has been happening for several years. It was the subject of a 2016 documentary called “Do Not Resist.” Its Director, Craig Atkinson, talked to “Marketplace” host Kai Ryssdal about his film right before it was released. Below are excerpts from that 2016 interview.

After Michael Brown was shot and killed by a police officer in Ferguson Missouri in 2014, police officers and law enforcement patrolled the streets, but often looking more like soldiers than cops. They are wearing military gear, driving military vehicles, and sometimes using military-grade weapons. The idea of the increasing militarization of American police departments is the subject of a new documentary called “Do Not Resist.” Its Director, Craig Atkinson, talked to host Kai Ryssdal about his film.

On the inspiration for this film:

My father was a police officer for 29 years outside of Detroit and he was actually a SWAT officer for 13 of those years. And so I kind of grew up with the “War on Drugs” era of policing around the kitchen table. And so, when I saw the Boston Marathon bombing, I saw a complete departure from the era of SWAT my dad in to what I saw, you know, playing out in the days after the Botson Marathon bombing.

On what he saw while making the film:

Well, $39 billion worth of military hardware had been gifted to domestic law enforcement agencies. And like any other investment, you get the returns, you know, where you put the energy. And in this case, we invested in weapons and we’re seeing the aftermath of that now.

The justification is, you know, terrorism can happen anywhere. And while that may be the case, I just think that we need to reconsider how we spend money in our communities. When we went down to Texas and saw these MRAPs sitting in the field—well, they all cost $1.2 million dollars each. And we were at an army depot and we were driving and there were miles of them, miles and miles of them.