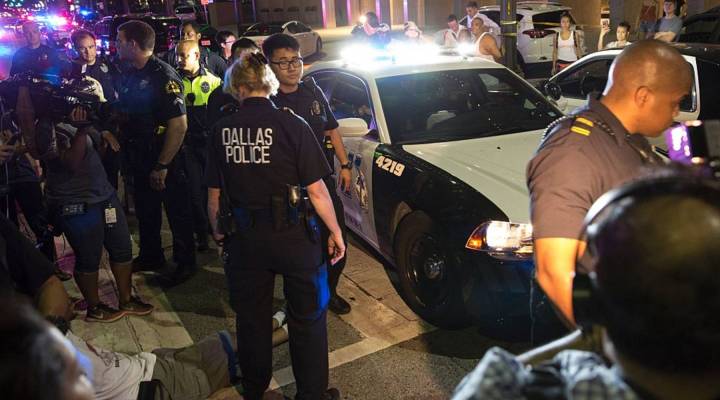 COPY
Police attempt to calm the crowd as someone is arrested following the sniper shooting in Dallas on July 7, 2016.  Laura Buckman/Getty Images

Police attempt to calm the crowd as someone is arrested following the sniper shooting in Dallas on July 7, 2016.  Laura Buckman/Getty Images
Listen Now

In the aftermath of the killings of Alton Sterling and Philando Castile and the sniper killings in Dallas, there have been calls for policing reforms across the country. Reforms that put an emphasis on de-escalation and diversity in hiring. But in Dallas, that was already happening.

Naomi Martin is a reporter for the Dallas Morning News. She’s been following the Dallas Police Department over the years as they have made reform efforts. Marketplace host Molly Wood sat down with Martin to discuss what the community and Dallas police are experiencing the day after these sniper attacks.

On the Dallas Police’s work in the community:

The attack may have been on police in general, it may not have even been Dallas police specific. But [the Dallas Police Department] has been widely credited for helping build the relationship with the Black community. You know they do a lot of community events, they do Chief on the Beat, where the Chief goes out and talks to people. They also release a lot of information on officer involved force. Not just fatal shootings, but if they officer shoots someone and they live, it’s all on their website, which is pretty progressive for a lot of police departments.

On the importance of diversity on police forces:

It’s hugely important, especially if you’re Black or Hispanic. You don’t want feel like  a bunch of white cops are targeting you because of your race. The department has been really aggressive with hiring diverse candidates for the force. Chief Brown has made it a big point to promote within the department Black and Hispanic officers and women.

On how they’re training to de-escalate situations:

It takes a lot to train every officer on the force. What they’re doing is a lot of reality based training, which is in this big warehouse that they’ve outfitted to make it look like realistic situations that officers find themselves in. Then they have officers acting out parts to pretend like they’re rushing at the officer. The goal is to try to get the officers to use less force if possible and not just react from fear alone. But those sessions take hours and hours. So that is one financial aspect that they’re dealing with is trying to train everyone while still staffing the streets and the investigation bureaus.