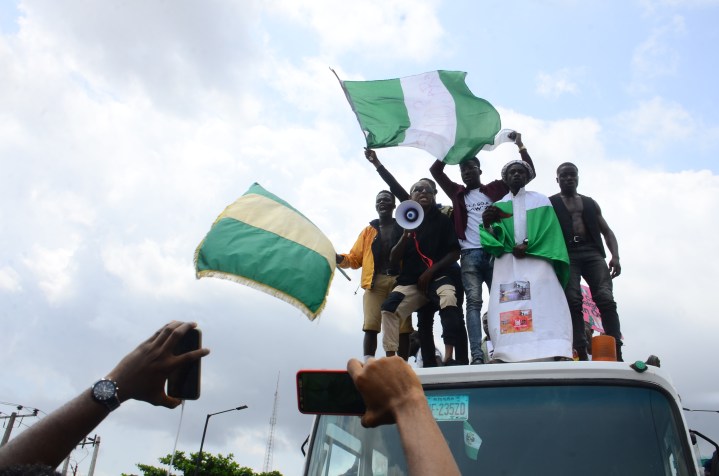 COPY
Youths of ENDSARS protesters display the Nigerian flag and a placard in a crowd in support of the ongoing protest against brutality of the Nigerian police force unit called Special Anti-Robbery Squad (SARS). Olukayode Jaiyeola/NurPhoto via Getty Images

Youths of ENDSARS protesters display the Nigerian flag and a placard in a crowd in support of the ongoing protest against brutality of the Nigerian police force unit called Special Anti-Robbery Squad (SARS). Olukayode Jaiyeola/NurPhoto via Getty Images
Listen Now

Curfews have been enacted across Nigeria as protests against police brutality continue to intensify.

The Nigerian army denied those reports, though the Legos state governor acknowledged a serious shooting had taken place and said forces beyond his control were responsible.

The demonstrations began after the head of the Nigerian police ordered anti-riot officers to be deployed across the country in an effort to settle protests and what the police say is an upsurge of violence related to two weeks of protests. Participants have used #EndSARS across social media as they called for the country’s Special Anti-Robbery Squad (SARS) to be disbanded. The unit been accused of illegal arrests, assaults and shootings.

On Oct. 11, the nation’s president dissolved the unit, but demonstrators want to see more change in Nigeria’s security forces and a rethink in how the country is governed.

Twelve days of protests, which have at times turned violent, have caused $1.8 billion in economic damage, according to the Lagos Chamber of Commerce. It’s feared a new 24-hour curfew, enacted on Wednesday, will cause further damage to shuttered shops, business owners, and young people.

On the global edition of the “Marketplace Morning Report,” the BBC’s Ishaq Khalid told Victoria Craig how businesses, and people, across the country are coping.

Victoria Craig: How are people in Nigeria viewing the new curfew?

Ishaq Khalid: Lagos is the wealthiest city in Nigeria. So this curfew has actually caused a lot of economic losses. Main activities have been grounded, many people can’t go to offices. They can’t go to businesses. So, it’s total economic chaos because of this curfew and violence.

Craig: Police brutality is at the heart of the protests there at the moment, and it all began with calls to disband the Special Anti-Robbery Squad — or SARS — earlier this month.

Khalid: Yes, exactly. The protesters initially talked about the notorious anti-robbery “unit” of the Nigerian police known as SARS. They called for its disbandment. Authorities, of course, abolished it. But the protesters went on to demand wider police reforms and later also talking about governance, economic issues, unemployment, saying that the youth, which forms the majority of Nigerian population, has been neglected. So, there is the economic part of it, there is the governance part of it and also there is the security part of the protest.

Craig: What is it exactly that the protesters are calling for at this point now that that unit has been disbanded? What would they like to see now?

Khalid: Well, basically, what they’re talking about is practical action. Because this is not the first time the Nigerian authorities announced reforms, disbandment or restructuring of that particular police unit. So there is a sense of mistrust between the protesters and the government. And they are also talking about wider police reforms which the government has promised.

But one thing that they’re talking about is to make sure that the youth have a brighter future. Of course, that is a demand that probably cannot be met within a day or two. The government is saying, of course, it is now understanding the frustrations of the young people here and it is coming up with different initiatives to create jobs, to create education, skills, acquisition programs for the young people. But there is still a sense of mistrust, because this is a long-standing complaint, grievance, by the young people, not only in recent months or recent years. It’s a long, deep-rooted frustration among Nigerian young people.

Craig: Another issue is corruption, which the police have been trying to tackle since 2016. What action do you think really is needed to solve these long-standing issues?

Khalid: They are talking about corruption on the part of the police officers who extort money from travelers, from motorists on the highways. They’re also talking about corruption in government. You know, the politicians, according to the protesters, have been enriching themselves with the enormous oil wealth of Nigeria. Nigeria is one of the top oil producers in the world. In Africa, is the largest oil producer. So the young people are saying that they’re not benefiting from this wealth. Some of them have graduated from universities, they don’t have jobs. Some of them could not even go to school because of poverty. Some of them can’t even have a job at the moment. They also can’t have some kind of skills to survive, so to speak. So there is a lot of frustration on the streets. And then the young people are saying this is the time for the government to act, and they say enough is enough.