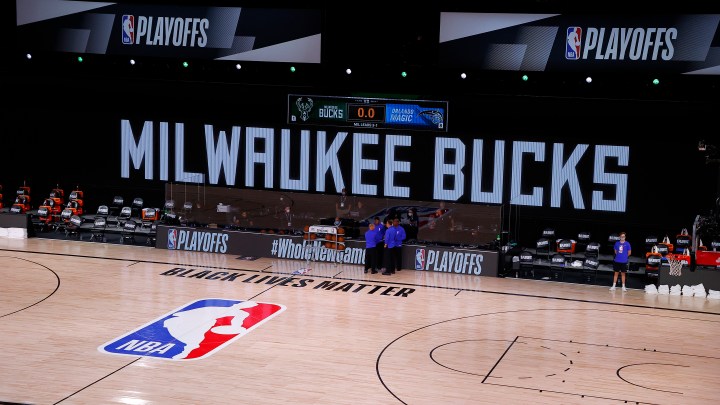 COPY
The Milwaukee Bucks, scheduled to play against the Orlando Magic in the NBA playoffs Wednesday, decided not to play to take a stand against the police shooting of Jacob Blake in Wisconsin. Kevin C. Cox/Getty Images
Race and Economy

The Milwaukee Bucks, scheduled to play against the Orlando Magic in the NBA playoffs Wednesday, decided not to play to take a stand against the police shooting of Jacob Blake in Wisconsin. Kevin C. Cox/Getty Images
Listen Now

A wave of athlete protests against the police shooting of Jacob Blake in Kenosha, Wisconsin, has gained momentum. Blake, a Black man, was shot in the back by police seven times as he tried to enter his car.

In protest, the NBA’s Milwaukee Bucks decided to not attend their playoff game. Other teams across the sports world have joined in solidarity. Three WNBA games, three Major League Baseball games and five Major League Soccer games were called off. Tennis star Naomi Osaka said she would not play in the Western & Southern Open semifinals Thursday, and matches have been put on pause until Friday.

Kenneth Shropshire, professor of global sport and CEO at the Global Sport Institute at Arizona State University, spoke with “Marketplace Morning Report” host Sabri Ben-Achour about this, and the following is an edited transcript of their conversation.

Kenneth Shropshire: It certainly brings attention to the issues. Think back to Muhammad Ali and his protest against the Vietnam War, he certainly shifted many people in the direction to better understand the issues. The magnitude of the presence of John Carlos and Tommie Smith on the victory stand in 1968. And certainly the events leading up to today, you know, starting with the earlier murders of people like Trayvon Martin and Eric Garner — as the athletes began to speak, there was certainly more attention brought to to the these issues. So yes, I have to say, especially in this moment of pandemic, nothing else to to watch that’s new on different forms of media, that this is a really, universally, unique day in history and in sport.

Ben-Achour: Sports, college and professional, they’ve been hit pretty hard by the coronavirus. Some estimates put the losses upward of $12 billion. Do these protests pose an additional hit to the bottom line? Or, basically, were losses already already huge?

Shropshire: There’s potential for an additional hit. I mean, certainly the media rights deals if the games aren’t played. The sponsorship advertising deals if the games aren’t played. Sure, there’s more harm that can come, and that is, again, with the biggest sports protests, that is the goal: to strike the parties economically so that they begin to examine the underlying social issues. So this is, it’s both a principle — “Why should we play games when these horrible things are going on, especially in our home states?” And there’s an impact on people that have power that can converse with people with power. So it’s a very impactful move. It’s something that, as someone who has watched sport like this for 40, 50 years, it truly is a unique moment in time in the United States.