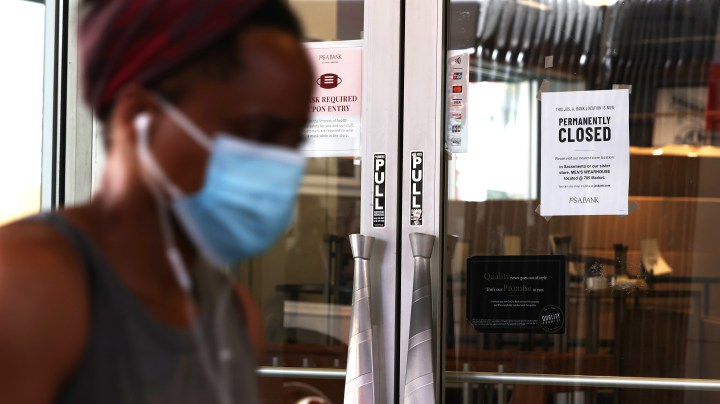 COPY
A pedestrian walks past a permanently closed Jos. A. Bank clothing store in August in San Francisco. Tailored Brands, the parent company of Jos. A. Bank and Men's Wearhouse, is one of 29 big retailers to file for bankruptcy this year. Justin Sullivan/Getty Images
COVID-19

A pedestrian walks past a permanently closed Jos. A. Bank clothing store in August in San Francisco. Tailored Brands, the parent company of Jos. A. Bank and Men's Wearhouse, is one of 29 big retailers to file for bankruptcy this year. Justin Sullivan/Getty Images
Listen Now

It’s been a very tough year for the retail industry. A report out Tuesday from the accounting consultancy BDO USA said 29 big retailers filed for bankruptcy protection through August.

And if bankruptcies continue at that pace, the number could rival the bankruptcies of 2010, after the Great Recession. For retailers, the last three months of this year will be even more critical than usual for their survival as they look for some hope around the holidays.

The report found that bankrupt retailers have closed almost 6,000 stores this year. Retailers that have seen the most bankruptcies sell apparel — products we just haven’t been buying much of during the pandemic.

Stores in malls have been especially hard hit.

“If you’ve got [800] or 900 stores spread across malls in the United States, you probably need about half that many stores,” said Brian Yarbrough, an analyst with Edward Jones.

He said the big box retailers are spending more to attract consumers who just aren’t going to the mall and want to shop online.

“You’re seeing the Walmarts and Targets of the world invest billions of dollars a year in technology,” he said. “These small companies can’t keep up.”

But many retailers rely on their physical locations and are struggling to stay competitive and attract shoppers during a critical holiday season.

David Berliner, a partner at BDO, said that could include services like contactless checkout or in-store pickup for online orders.

“Whatever they can do to make consumers feel safe going into these brick-and-mortar stores,” he said.

Berliner said what retailers need to figure out is what makes sense for a physical store to be profitable.

“To make sure the brick-and-mortar stores are in the right place, the right size store — I think stores could be smaller now than was designed years ago,” he said.

Berliner said the pandemic has just accelerated a trend of store closures throughout the United States. That’s because, he said, the country has been “over-stored” for years.