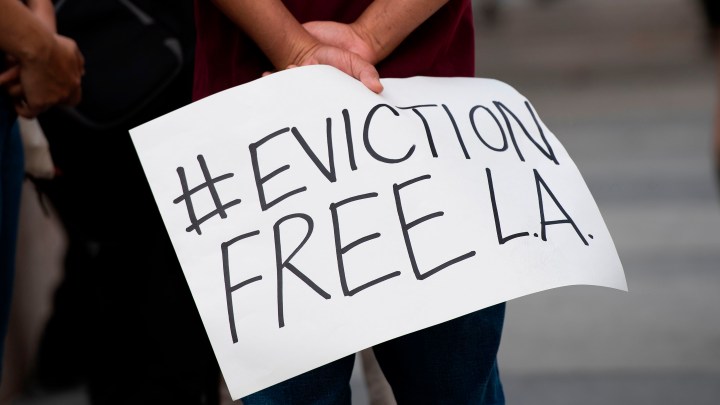 On the final night of its session Monday, the California Legislature enacted a ban on evicting people who can’t pay the rent through Feb. 1, 2021. Back rent owed from March through Aug. 31 of this year would be turned into consumer debt. If people don’t pay, property owners can take the tenants to civil court, but cannot evict them.

For rent owed after August and through the end of January 2021, tenants must pay at least 25% of missed payments or risk eviction.

Nationally during this COVID-19 collapse, the situation for many renters is dire. This includes many immigrant families without documentation.

On the evening of June 15, Maria, who asked that her last name be withheld, says she locked herself in her Los Angeles apartment, where she’s lived for 10 years, while three men stood outside banging on the door and yelling.

They were there to collect rent.

“I felt terrified. They came three times in the same day. They would come without masks, without gloves, and I would start shaking,” Maria said.

She said she’d already told her landlord that month she wouldn’t be able to pay because of the pandemic. She worked a food cart, and with the quarantine, her income went from $1,600 a month to $160. Her husband, a cook, was also out of work. They are both undocumented, so they don’t get any unemployment benefits.

Across the country, high unemployment and the end of eviction moratoriums has housing advocates warning about a nationwide wave of evictions. For many immigrants, especially undocumented ones, that crisis has already begun.

“In the COVID period, [undocumented immigrants] have been working in a sector that has been hit particularly hard”, said University of California, Davis economist Giovanni Peri, who specializes in immigrant issues. “In general, in the recession, the undocumented are hit harder, one because they’re younger, a little less educated than natives.”

It’s a hit that carries over from those undocumented workers to the economies they live in. In a new report, UCLA professor Raúl Hinojosa found that “in places like Los Angeles, it really creates a massive economic hole in the middle of the LA economy. We’re estimating about a billion dollars a month.”

And while evictions have been on hold in California, tenants facing financial hardship, have not had peace of mind. “We noticed that landlords are responding with increased harassment, they’re neglecting essential repairs” said attorney Faizah Malik, who is representing tenants in a lawsuit against the Apartment Association of Greater Los Angeles. “And the big thing we’re seeing in LA, for sure, is an increase in illegal lockouts.”

Malik said an undocumented tenant has the same rights as anyone when it comes to evictions. But they are often terrified to come forward and report abuse.

Maria says her landlord has repeatedly threatened to report her to immigration authorities. That night, when the three men came to her house, she said she despaired. “I felt I was having a heart attack. I called the ambulance,” she said.

At the hospital, she was told she was having an anxiety attack.

When she got back, she picked up the phone, called a cousin and asked for a loan — two months worth of rent.