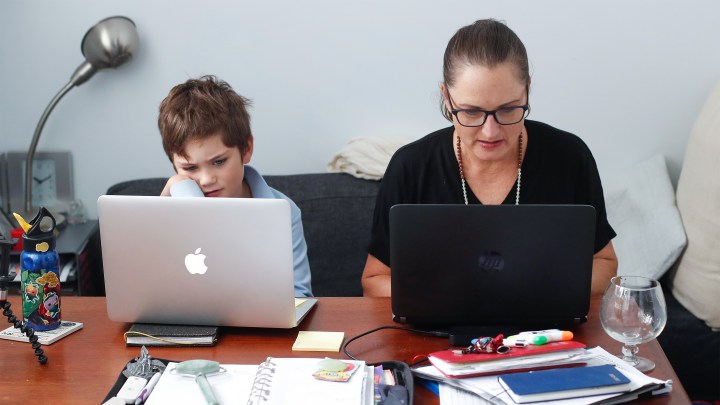 COPY
Unemployment numbers are likely missing people who aren't working in order to home-school or care for family. Above, a mom works while her son does schoolwork during the pandemic. Brendon Thorne/Getty Images
COVID-19

Unemployment numbers are likely missing people who aren't working in order to home-school or care for family. Above, a mom works while her son does schoolwork during the pandemic. Brendon Thorne/Getty Images
Listen Now

The Labor Department’s monthly employment report for April shows the jobless rate has soared to 14.7%, the highest level since the Great Depression. The U.S. lost 20.5 million jobs amid the coronavirus pandemic. Almost all the job growth achieved during the 11-year recovery from the Great Recession has now been lost in one month.

We also know that more than 33 million people have filed for jobless benefits since mid-March. And this April report does not include many of the most recent job losses. It also does not account for the entirety of unemployment resulting from the pandemic.

As bad as the numbers look, the April jobs report can’t capture the full scale of employment loss since the pandemic began, according to Erica Groshen, the Bureau of Labor Statistics’ chief economist in the Obama administration.

“This is a shock unlike anything else we have sustained,” Groshen said. The official unemployment rate is likely not counting many who’ve lost their jobs, she added.

That’s because the standard definition of an unemployed person is someone who hasn’t had paid work and has been actively looking for a job. But in the pandemic, millions have been laid off or left a job and aren’t hunting for a new one.

“People who say that for now, ‘I’m not working, and I’m not looking for work until I feel I can be safe out there,’” Groshen said. Also, the unemployment rate may not count people out of work caring for others in the pandemic, people “who maybe made the decision to stay home and home-school or take care of elderly relatives because they don’t want them endangered.”

And, it’s going to be hard to gauge exactly how much job loss is temporary — just until companies reopen and workers get called back.

Joseph Brusuelas, chief economist at RSM, a consultancy, has been tracking jobless claims.

“Many of the initial claims were classified as furloughed, but are becoming permanently unemployed,” he said. Meanwhile, many who still have jobs, aren’t working or earning nearly as much as they used to, said Julia Pollak, a labor economist at ZipRecruiter.

In a recent survey, ZipRecruiter found that about one in four job-seekers has had hours or earnings cut, or both.