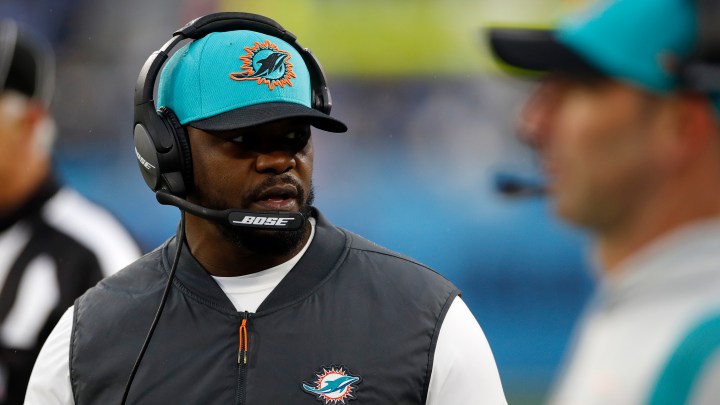 The NFL has been getting a lot of attention this week — and not just because the Super Bowl is on Sunday. Last week, former Miami Dolphins head coach, Brian Flores, filed a class-action lawsuit alleging the league’s hiring practices are racist.

While 70% of all NFL players are Black, only 6% of NFL head coaches are.

In his lawsuit, Flores claims that racist hiring practices by NFL franchises have made it a racially segregated league. One that’s “managed much like a plantation.”

The problem here isn’t necessarily the league itself, said Richard Lapchick, who leads the Institute for Diversity and Ethics in Sport at the University of Central Florida.

Lapchick produces an annual race and gender report card on the major sports leagues in the U.S. This year, he gave the NFL a B.

“They’ve done a good job in a lot of ways on the racial issue. The league office itself is very diverse,” Lapchick said. “But they don’t have control of what, or who the club’s hire.”

The NFL teams are independent franchises. The league does require them to at least interview minority candidates when they’re looking for a new head coach, but Flores claims in the lawsuit that those interviews are a sham — just checking boxes.

The timing of Flores’ lawsuit is no accident, per Maureen Weston, sports law professor and director of the Entertainment, Media & Sports Dispute Resolution Project at Pepperdine University.

“It’s filed during Black History Month on the eve of the Super Bowl. So it’s getting a lot of attention, as it deserves,” she said.

Last weekend, the Dolphins — who fired Flores last month — hired Mike McDaniel, a former San Francisco 49ers coordinator who identifies as multi-racial. The next day, the Houston Texans hired Lovie Smith, a coaching veteran who was the first Black head coach at a Super Bowl.

“I can’t say that the hiring by the Texans and the Dolphins in the last couple of days was a result of Flores’ lawsuit, but it’s certainly a possibility that that influenced the decision in those two cases,” said Richard Lapchick at UCF.

Maybe the best way to get NFL franchises to hire more coaches who look like the players is through the players themselves, said Charles K. Ross, who teaches history and African American studies at the University of Mississippi.

“And I know that they aren’t necessarily comfortable probably doing this, but you’re gonna have a critical mass of very key players that are going to have to begin to articulate these things in the public and behind closed doors,” Ross said.

He said many aren’t comfortable doing that in part because NFL contracts are not guaranteed, so players can be cut or effectively blackballed when executives allege they’re being insubordinate.