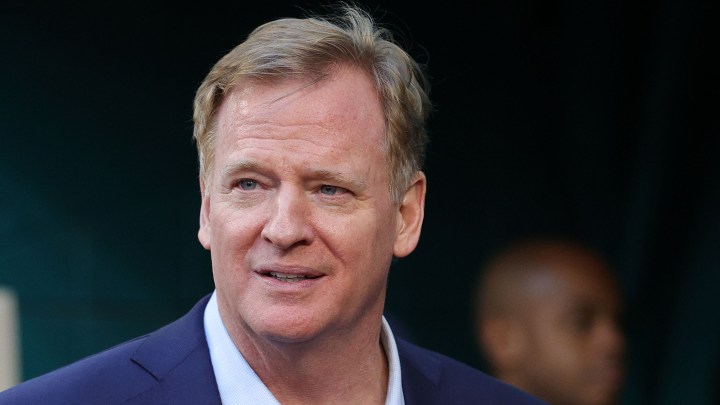 COPY
“The protesters' reactions to these incidents reflect the pain, anger and frustration that so many of us feel," NFL Commissioner Roger Goodell said. Maddie Meyer/Getty Images

“The protesters' reactions to these incidents reflect the pain, anger and frustration that so many of us feel," NFL Commissioner Roger Goodell said. Maddie Meyer/Getty Images
Listen Now

Five days after the killing of George Floyd by Minneapolis police, NFL Commissioner Roger Goodell weighed in for the first time.

“The protesters’ reactions to these incidents reflect the pain, anger and frustration that so many of us feel,” he said.

Some players and NFL critics called that statement disingenuous.

“There was kind of no right move for Roger Goodell to make in this situation. But frankly, he put himself in that place and the NFL put itself in that place,” said Kavitha Davidson, a sports writer and podcast host for The Athletic.

Colin Kaepernick became the face of the issue in 2016, when he began kneeling during the national anthem to protest the killing of Black people by the police.

That year, Kaepernick was the starting quarterback for the San Francisco 49ers. After he began kneeling during the National Anthem, his team cut him loose at the end of the season.

“Clearly, Colin Kaepernick paid the ultimate price, in terms of his career,” said Charles K. Ross, professor of African American studies at the University of Mississippi and author of the book “Outside the Lines: African-Americans and Integration in the National Football League.”

Ultimately, team owners saw Kaepernick as too risky given the controversy he generated, and they’re the ones writing the checks. Ross said that power dynamic in the NFL remains.

“When you feel like you can kind of push your labor force around and you still have control, why do you have to worry about the public? You do what you want to do,” he said.

What the league and its teams feel compelled to do right now is show support for the fight against police brutality.

Richard Lapchick, director of the Institute for Diversity & Ethics in Sport at the University of Central Florida, says after 2016, the NFL started social justice educational programs.

“So when I heard Roger Goodell say this, I didn’t feel critical of it all, I thought it was part of what they have been doing,” he said.

In the aftermath of George Floyd’s death, the NFL seems more cognizant of the need to protect its revenue and change its image. In recent days, a group of prominent players turned up the pressure on Goodell and the league to say more. Goodell responded by releasing a video more strongly condemning racism and the oppression of Black Americans.

“We the National Football League admit we were wrong for not listening to NFL players earlier and encourage all to speak out and peacefully protest,” Goodell said.

In appeasing those players, Goodell has to walk a fine line, said Davidson.

“The fear is always turning off those dollars, turning off the people who you view as being the most financially valuable to your fan base,” she said.

Goodell’s getting some praise for doing more, but in his recent statement he didn’t mention Colin Kaepernick by name. The 32-year-old quarterback, who started in a Super Bowl, is still out of a job.