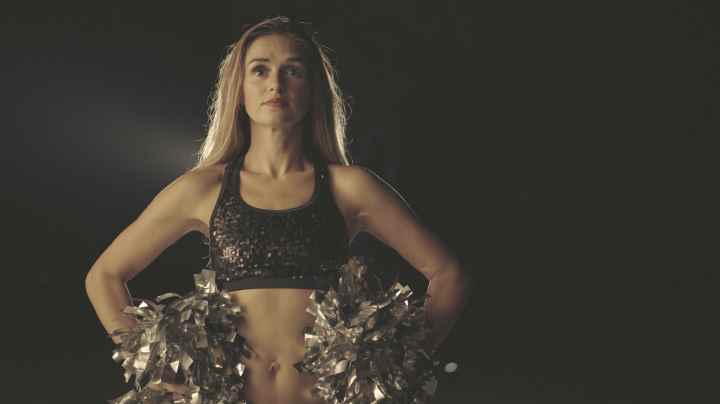 COPY
Lacy Thibodeaux, former cheerleader for the Oakland Raiders, took the NFL to court after she realized her employment contract contained illegal provisions that robbed her of wages. Yu Gu

Lacy Thibodeaux, former cheerleader for the Oakland Raiders, took the NFL to court after she realized her employment contract contained illegal provisions that robbed her of wages. Yu Gu
Listen Now

NFL cheerleaders have been underpaid for decades, sometimes earning as little as $5 per hour — less than minimum wage — while the players they root for earn millions. That’s starting to change, thanks to a series of lawsuits brought by cheerleaders in recent years. So far, 10 out of 26 NFL teams with cheerleaders have been sued for wage theft, unsafe working conditions, sexual harassment and discrimination.

The film, which premiers on PBS on Jan. 4, details the long, often unpaid hours cheerleaders were required to put in for rehearsals and sponsored events, and the expenses they were expected to absorb including transportation to away games and hair and makeup for official photoshoots.

“I think it’s a shame that in the professional leagues [cheerleaders’] role has been severely limited and has not been able to evolve. And part of that is because of gender inequality; because they don’t have power in their workplace,” said Gu.

The following is an edited transcript of Gu’s conversation with Uhler.

Andy Uhler: It’s hard to believe that the NFL has been able to get away with paying these cheerleaders so little for so long. I’m curious, how did this happen? Was it just sort of flying under the radar? What was going on?

Yu Gu: Yeah, I think at the very beginning, [cheerleading] was given to these women as a way for them to really showcase their talent, and in a way volunteer to be there to perform. And over the years, as the NFL has grown into this multibillion-dollar industry, that original thinking really hasn’t changed much. So now these women that are in the film, they’re really the first women to stand up and say, “No, this is not right and we need to do something about it.”

Uhler: And some of this has to do with the fact that teams, not the NFL itself, pay the cheerleaders. I’m curious how the NFL and its Commissioner Roger Goodell has rationalized it.

Gu: I think Roger Goodell has been on public record at a press conference, saying he encourages each team to pay each employee fairly, but it’s really the responsibility of each team, each corporation, to pay their employees. And that’s sort of the rationale. But at the same time, these women, they’re NFL cheerleaders; they’re being marketed by the NFL on their website. So it’s really part of this system that is making the NFL and their teams money.

Uhler: There’s an important sort of gender aspect here too, right? There’s wage discrimination just wholly, but also the way that we treat these women as sort of add-ons to what these men are doing out there on the field. That’s an important part of the story you’re trying to tell.

Gu: Yeah, again, I think since the beginning of cheerleading in the professional league and the NFL, it was seen as sort of this add-on. But since then decades later, you see the evolution of cheerleading in high school and colleges, and it’s very much become its own thing. Men and women are passionate about cheer, about cheerleading. It’s a sport; they’re athletes as well as talented dancers and performers. So it’s definitely evolved so much, and I think it’s a shame that in the professional leagues their role has been severely limited and has not been able to evolve. And part of that is because of gender inequality; because they don’t have power in their workplace.