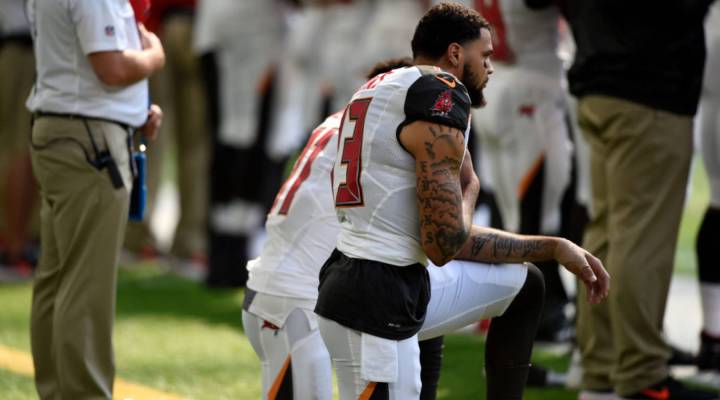 Tampa Bay Buccaneers Wide Receivers Mike Evans #13, and DeSean Jackson #11, take a knee during the national anthem before the game against the Minnesota Vikings on September 24, 2017 at U.S. Bank Stadium in Minneapolis, Minnesota.  Hannah Foslien/Getty Images

Tampa Bay Buccaneers Wide Receivers Mike Evans #13, and DeSean Jackson #11, take a knee during the national anthem before the game against the Minnesota Vikings on September 24, 2017 at U.S. Bank Stadium in Minneapolis, Minnesota.  Hannah Foslien/Getty Images

This weekend, one of America’s favorite pastimes came with a large side of politics. After President Donald Trump called on National Football League owners to fire football players who do not stand during the pledge of allegiance, hundreds of football players, coaches and NFL owners instead joined the peaceful protest during games on Sunday.

Two questions arose following President Trump’s demand, and the resulting protest. Can the president call for the firing of private employees? And can private employees be fired over political protests?

Government officials, including the president, are prohibited from trying to influence someone’s employment based solely on political affiliation. However, Trump has called for the firing of all protesting football players — regardless of their political affiliation or the political affiliation of their team owners, points out Michael McCann, Sports Illustrated’s legal analyst and the associate dean for Academic Affairs at the University of New Hampshire School of Law. Goodell as well as a number of the team owners are Republican.

This is not the first time that the issue of freedom of speech and freedom to protest in the workplace have come up. Earlier this year, a number of people were fired after being spotted at the White Supremacist rally. Google, too, came under scrutiny this year when it fired an engineer who circulated a memo criticizing Google’s diversity initiatives and claiming that women were not cut out to be engineers. While the company claimed that the engineer in question violated its code of conduct, he claimed he was being wrongfully punished for expressing his opinion.

When it comes to the First Amendment, it only acts as a restraint on the government, not private employers, according to Lee Rowland, senior staff attorney at the ACLU’s Speech, Privacy, and Technology Project.

“When you work for the private sector and your employer is not the government, the Constitution gives you zero protection in terms of keeping your job based on what you say,” she said.

Private employees — including NFL players — can be disciplined or fired for speech, opinions and political affiliations expressed at work or outside work. For example, back in 2005, Lynne Gobbell was fired from her job because she had a Kerry/Edwards bumper sticker. In 2011, Megan Geller claimed she was fired from Outback Steakhouse for wearing a “Don’t Tread on Me” bracelet associated with the Tea Party

Yet in the wake of Trump’s comments calling for the firing of those who protest during the national anthem, more than 200 players participated in the protest on Sunday. The protests took different forms with some players taking the knee during the anthem and others linking arms in solidarity. Three teams — the Pittsburgh Steelers, the Seattle Seahawks and the Tennessee Titans — remained in their locker rooms during the anthem.

Many people booed the players who kneeled yesterday (which was a small percentage of total). These are fans who demand respect for our Flag!

And while Trump is right that that’s just a portion of the 1,696 players on NFL’s active players, it’s definitely a lot more than the six players who protested the anthem a week ago. There is power in numbers, of course. If the league were to do as the president suggested, it would have to suspend or fire hundreds of players — all of whom are not that easily replaced.

The original protest started more than a year ago, when in August of 2016, football player Colin Kaepernick refused to stand for the national anthem as a form of protest against inequality and injustice. President Trump said that this form of protest is disrespectful to “the flag and country” and on Friday called on the NFL to suspend or fire any players that participated in such a protest.

“Wouldn’t you love to see one of these NFL owners, when somebody disrespects our flag, to say, ‘Get that son of a bitch off the field right now. Out! He’s fired. He’s fired!’” Trump said on Friday, while appearing at an Alabama rally for Republican senator Luther Strange. The next day, he once again tweeted that the NFL should fire any player that did not stand for the national anthem. The NFL players association and NFL commissioner Roger Goodell released statements supporting the players’ rights to peacefully protest.

Roger Goodell of NFL just put out a statement trying to justify the total disrespect certain players show to our country.Tell them to stand!

Even as the NFL decided to defend their players’ right to peacefully protest, other employers took a different route. On Sunday, two NASCAR owners said they would fire any driver that did not stand for the anthem.

“It’ll get you a ride on a Greyhound bus,” said Richard Childress, owner of Richard Childress Racing. “Anybody that works for me should respect the country we live in. So many people gave their lives for it. This is America.”

Trump took to Twitter on Monday expressing his happiness with NASCAR’s stance on the issue.

So proud of NASCAR and its supporters and fans. They won’t put up with disrespecting our Country or our Flag – they said it loud and clear!

But despite the president’s words and the threat from Childress and Richard Petty, owner of Richard Petty Motorsports, NASCAR driver Dale Earnhardt Jr. took to Twitter on Monday to express support for the NFL players, stating that all Americans have the right to peacefully protest.