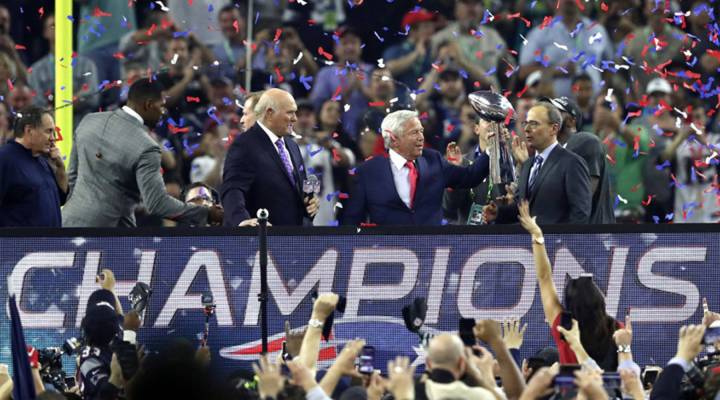 More than 100 million people will watch the New England Patriots battle the Philadelphia Eagles in Super Bowl LII on Sunday. Between the action (and the queso, wings and beers) NBC is sure to give viewers a shot of the owner’s box. On one side, the Patriots’ Robert Kraft, a guy who made his money in paper and packaging. On the other side, Jeffrey Lurie, whose grandfather founded General Cinema. Their teams are opponents, but the owners have one thing in common — they’re white men. Ownership in the National Football League is almost exclusively made up of guys like them.

In terms of the sports product, some would argue Tom Brady of the New England Patriots is the “face of the NFL.” He already has five Super Bowl rings and he’s widely considered one of the greatest quarterbacks of all time. But as a white player, he’s in a minority on the field.

“You’re talking about a labor force that is about 70 percent African-American,” said Charles K. Ross, professor of African American Studies at the University of Mississippi and author of the book, ” Outside the Lines: African Americans and the Integration of the National Football League.” He noted that, of the NFL’s 32 teams, just two have majority owners who are people of color: Pakistani-American Shahid Khan bought the Jacksonville Jaguars in 2011. And Kim Pegula, a Korean-American, is co-owner of the Buffalo Bills. Ross acknowledges that very few people, whatever their ethnicity, have the huge bucks needed to buy a team. But he argued money isn’t the whole explanation.

Numbers according to most recent data.

“There are probably a couple of people that have the wherewithal that are minorities, particularly African-Americans, that could potentially become owners,” Ross said. “But I think that there is this kind of good-old-boys’ club.”

Anyone hoping to join the club needs two-thirds of the current ownership to vote for their “membership” (purchase price and plan for the franchise they’d be buying). It feels a bit like a condo board. The NFL and the owners contend it is just about money. Dan Kaplan, staff writer for the Sports Business Journal, said the sheer cost of franchises creates a barrier.

“Unfortunately, we live in a society where most of the wealth has been accumulated by white males,” Kaplan pointed out. “And that is predominantly who can afford these very valuable sports assets.”

Every year, Richard Lapchick, director of the Institute for Diversity and Ethics in Sports, publishes a racial and gender breakdown of all the employees in the major sports leagues. He said the NFL is getting more inclusive. He even gave the league an “A” this year for its level of minority hiring, especially in terms of general managers and head coaches. Lapchick said the homogeneous nature of franchise ownership has more to do with exclusivity than race.

Numbers according to most recent data.

“There is some degree of a group of men who are generally white and generally politically conservative sitting around the table voting to keep their exclusivity any way they want to do that,” Lapchick said.

When the owner of the Carolina Panthers, Jerry Richardson, announced last year he was selling the team amid allegations of misconduct, rap mogul Sean Combs, better known as P Diddy, posted a video to Twitter.

Alone, Diddy doesn’t have enough cash, even though he’s worth about $800 million. The asking price for the Panthers is a cool $2.5 billion. Even so, Lapchick is optimistic more owners of color will soon emerge.

“Every breakthrough position in all the leagues, whether it was as a team president, general manager or a coach, all of those were considered concerns that needed to be changed, and they gradually did,” Lapchick said. “This is the kind of final barrier.”

Lapchick said having an African-American owner could change the tone in the NFL. Take the recent controversy over players taking a knee when the national anthem is played before games. Some current owners have criticized the move, which many players said was aimed at highlighting issues of racism and police violence. Lapchick said having a more diverse pool of owners could help the NFL reach out to more minority fans.