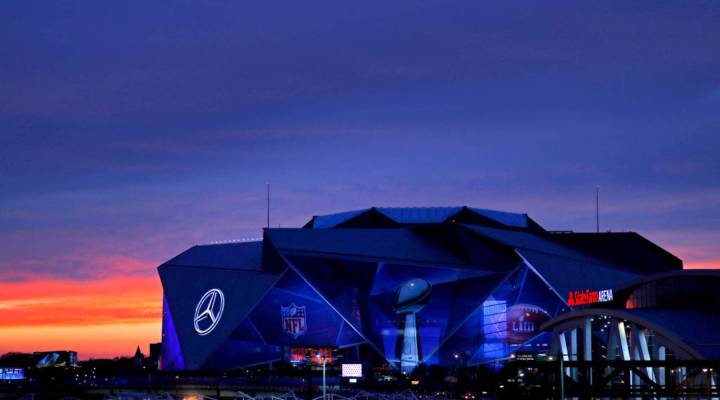 COPY
An exterior view of the Mercedes-Benz Stadium, where Super Bowl LIII will take place, is seen on Jan. 27, 2019 in Atlanta, Georgia. Justin Heiman/ Getty

An exterior view of the Mercedes-Benz Stadium, where Super Bowl LIII will take place, is seen on Jan. 27, 2019 in Atlanta, Georgia. Justin Heiman/ Getty
Listen Now

How do you advertise something without saying what it is you’re advertising? That’s the catch for companies hoping to market hundreds of parties and concerts connected to Super Bowl LIII. The Los Angeles Rams play the New England Patriots Sunday, Feb. 3 at Mercedes Benz Stadium.

The Atlanta Super Bowl Host Committee expects one million people to attend the game and events this week, including around 150,000 people from out of town.

If you turn on an Atlanta radio or television station this week, you’re likely to hear advertisements calling it “the big game.” The NFL hasn’t been successful in trademarking the expression.

He’s at his studio computer editing a commercial for a Dungeon Family concert happening in Atlanta on Super Bowl Sunday. On the desk next to him is a reference sheet listing the trademarked words he can’t allow on the radio. In the commercial, rapper Rico Wade promotes the show without using any of the protected words.

“This is the official ‘Welcome to Atlanta’ party, Sunday Feb. 3. Big Game Sunday. You know what it is. Everybody’s in town,“ says Wade over a background of music and sound effects.

“He mentioned a lot of things that were going on at the event. Then he said you know what it is,” Gigger said. “‘You know what it is’ pretty much says it in sum. We’re having a great big Super Bowl party. Just come on out and have a good time.”

Urban One is an official partner for the NFL’s 20th Annual Super Bowl Gospel Celebration at Atlanta Symphony Hall. The company is allowed to use trademarked language exclusively in those promotions.

With dozens of different ads airing across four radio stations, avoiding trademark infringement is a juggling act for a broadcaster to navigate. Urban One Regional Vice President Tim Davies has never received a cease and desist order.

“No, thank goodness I have not,” Davies said. “Because that’s exactly what you don’t want to have happen.”

But a church in Indianapolis was not so lucky. It did get the NFL’s attention in 2007 when it promoted a big screen Super Bowl watch party and the NFL objected.

“I think any time you have advertisements that are likely to confuse our fans and impact our partners — that will detract from the authentic NFL experience that we want every fan to have and that every fan deserves,” Danias said.

Safeguarding its trademarks also means the NFL can command hundreds of millions of dollars from sponsors like Hyundai, PepsiCo and Anheuser-Busch. Sponsorships start at around $10 million.

It’s that kind of free marketplace that trademarks can help to thrive, according to Atlanta media and First Amendment attorney Derek Bauer.

“Trademark protection is to carve out space for businesses to be creative and innovative and know that the brand that they’re developing is protected and won’t be stolen by a competitor,” said Bauer, who helps radio and television stations avoid trademark infringement.

If trademarks and free enterprise illustrate the American spirit, so does the only exception to enforcing them: Bauer also points out journalists can use trademarks in their reporting thanks to the First Amendment.