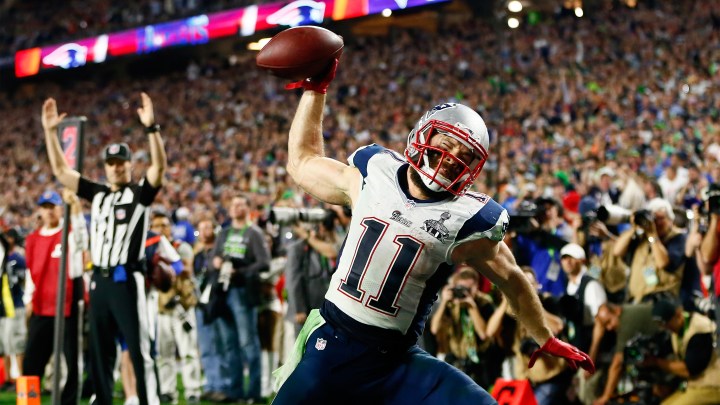 Julian Edelman of the New England Patriots celebrates as he scores a 3 yard touchdown in the fourth quarter against Seattle Seahawks during Super Bowl XLIX on February 1, 2015 in Glendale, Arizona. Kevin C. Cox/Getty Images

Julian Edelman of the New England Patriots celebrates as he scores a 3 yard touchdown in the fourth quarter against Seattle Seahawks during Super Bowl XLIX on February 1, 2015 in Glendale, Arizona. Kevin C. Cox/Getty Images

Picture this: a luxury condo high above the historic core in downtown Atlanta. A dedicated chauffeur. A “bespoke culinary experience curated by a team of hospitality experts,” including Michelin-starred chefs and renowned sommeliers and bartenders. A week of living the lavish life, plus … four VIP passes to the Super Bowl. All for the pretty price tag of $999,999.

As Super Bowl LIII approaches, the listing is the latest in the trend of selling the Super Bowl as a full, 360-degree experience, not just another football game.

“The event is being sold as something that is more than just the Super Bowl game itself,” economist Roger Noll explained. The modern Super Bowl experiences includes three days of musical headliners, starstruck halftime performances, and for fans at home, billions of dollars’ worth of advertising.

An estimated 72 percent of Americans will watch the Super Bowl this year, but most of those fans will be watching from the comfort of their own homes, bars or a local Super Bowl bash.

Except for those few super fans who are able to nab a ticket.

In recent years, trying to buy a Super Bowl ticket has become nearly as difficult as winning the lottery. Or in some cases, a matter of quite literally winning a lottery.

So how do you get a ticket?

Any individual who is an NFL season ticket holder is automatically entered into a lottery for the chance to purchase a ticket to the Super Bowl at face value. Although figures aren’t widely available to consumers, Yahoo News reported in 2018 that face-value Super Bowl ticket prices run anywhere between $950 for nosebleed seats and $5,000 for club seats. The NFL also operates on a lottery system, which selects a certain number of fans to receive free tickets to the Super Bowl.

But, if the odds aren’t in your favor, a few other options are still available.

The NFL, through a company called On Location Experiences, sells Super Bowl packages ,which, depending on what level you choose, can include tickets to the main game, premium tickets, hotel bundles, entrance to pregame celebrations and more. At the time of publication, OLE packages started at $2,232.50 per person and went as high as $9,075.

Another option available to super fans? Third-party vendors on the secondary market.

This resale marketplace, where buyers can resell tickets to other interested parties, is worth at least $8 billion, and according to Noll, is partly to blame for the rising prices of tickets.

“It is a measure of the incredible significance of sports in our culture,” he said. “It’s this money-making machine.”

Super Bowl tickets on websites such as Ticketmaster and StubHub were selling for prices as low as $2,323 per seat or as high as $339,500 for a suite at the venue at time of publication.

Why such the high premium?

It all comes down to the basic principles of high demand in a low-supply arena.

According to a report from ESPN, about 75 percent of tickets for each Super Bowl are reserved for players, NFL executives and sponsors, which doesn’t leave much for the everyday football fan.

Ticket brokering is exacerbated by the act of what analysts and third-party vendors call “ticket speculation” — a process where a reseller will sell tickets they may or may not have based on high demand from consumers. In recent years, companies such as SBtickets.com and Box Office Ticket Sales have been documented performing these practices, and it only adds to the complicated equation that is buying a ticket to the Super Bowl.

Ticket speculation, according to Noll, isn’t new, but it has taken on a new form at highly popular events, like the Super Bowl.

“The willingness of people to pay for tickets to this particular event has gone up so much more rapidly than all the other comparable things we can think of,” Noll said.

Interested in the history of Super Bowl ticket pricing? Check out our timeline below: