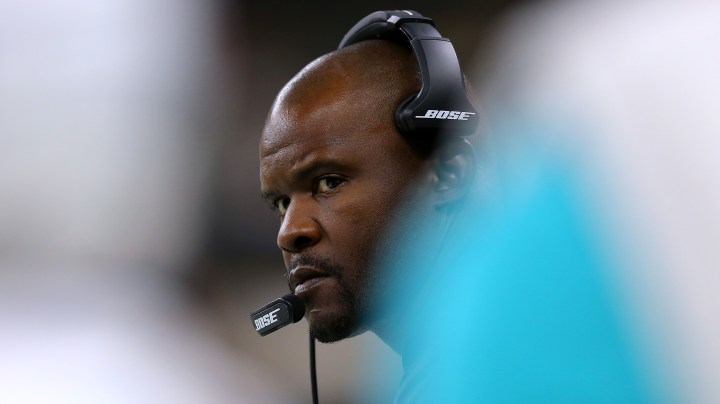 The NFL draft, which kicks off in Las Vegas Thursday night, has become a big deal. You could argue that, in some ways, it’s bigger than the Super Bowl.

The Las Vegas police department says it’s expecting 200,000 spectators per day over three days. That’s about how many people turned out to see the last draft in Nashville in 2019. All 32 of the league’s franchises will be there, as will the incoming rookie players who are aiming to become the league’s latest stars. And there will be mountains of TV coverage.

All the hype works to obscure the whole point of the draft: to provide a path for players leaving college ranks to go pro, sure, but also to create parity in the league. The draft aims to do that by giving last season’s worst team the first pick of incoming rookies. Their talent is supposed to make bad teams better.

Back in 2019, the Arizona Cardinals drafted Kyler Murray with the first pick in the draft and fans were naturally excited about that pick. The year prior, they’d been the worst team in the league, with three wins and 13 loses. And Murray did make them better; he was the 2019 offensive rookie of the year.

This year, the first pick in the draft was awarded to the Jacksonville Jaguars, who went three and 14 last year. Again, the idea is that by drafting a talented player, a bad team will get a better shot at winning.

“There’s certainly evidence that drafts and reverse-entry drafts promote parity,” said Brad Humphreys, an economics professor at West Virginia University. The evidence, he said, started with Major League Baseball. “Competitive balance improved substantially in Major League Baseball after the introduction of the draft in the ’50s.”

After that, it was no longer a foregone conclusion that the Yankees would end up in the World Series every year.

And that’s basically why leagues want parity — not to keep the Yankees out, but to make sure other teams have a shot at getting in. For owners, that means fans will keep turning up because there’s some hope.

The problem with this plan is that it also introduces a perverse incentive: tanking.

“Tanking is that purposeful underperformance with the ultimate goal of having some payoff that benefits you,” said Nick Watanabe, an associate professor of sport and entertainment management at the University of South Carolina.

He said leagues don’t want teams deliberately putting out a losing product because fans hate it.

Former Miami Dolphins head coach Brian Flores alleges that team’s owner, Stephen Ross, offered a bounty of up to $100,000 for every game the team lost in 2019. Ross denies the accusations. The NFL is investigating. Ross could lose the team if they turn out to be true.

The appeal of tanking is lose now so you can win later. But it doesn’t always work out that way.

“There’s a little catch,” said David Berri, an economics professor at Southern Utah University. “You don’t know that you’re gonna be able to draft anybody great, there’s no way to know that. For one thing, every single year does not have a player in the draft who is going to change the franchise.”

Berri said you almost have to get lucky by tanking at the right time.

Some leagues have acted to minimize the incentives for tanking. The NBA, for example, uses what’s called a draft lottery. Only the worst teams in the league get to participate. The very worst have about a one-in-seven chance of getting the coveted first pick. The fourteenth worst team in the league has a one-in-200 chance.

Humphreys at West Virginia said the lottery system is clearly better if the goal is to reduce the incentive to tank.

“But the problem with a lottery system is that drafts are also supposed to allocate the best new talent to the worst teams,” he said. “And if you put that draft lottery in place, that doesn’t always happen.”

All of this obsession with making sure there’s parity among teams in a professional sports league is pretty much limited to American sports. In the rest of the world, things are different. In soccer, for instance, if a team finishes as one of the worst in the league, they’re sent down to a lower tier. That means less exposure and less revenue. Berri at Southern Utah said that as commercially saturated as sports in the U.S. are, the league structure is borderline socialist.

“American sports are everything people think socialism is: Losers get rewarded, winners get punished,” he said. “And the American owners, who are all devout capitalists, all buy into this because it benefits them.”

If the goal really is parity and fan engagement, however, then maybe the NFL has it right: Eight different teams have won the last 10 Super Bowls. In Germany’s Bundesliga, Bayern Munich just clinched its tenth straight title.