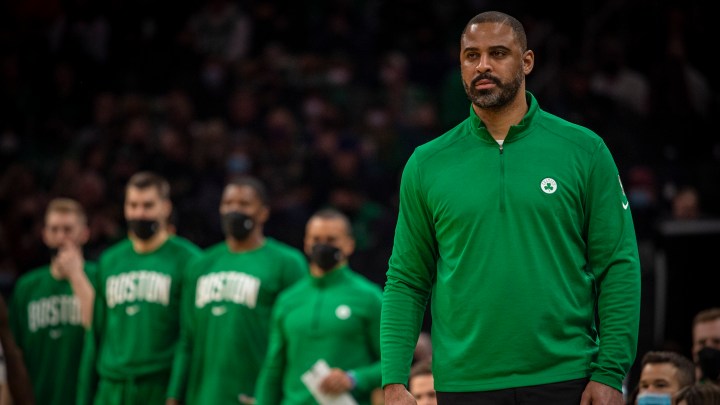 COPY
Ime Udoka has led the Boston Celtics to the NBA Finals in his first year as head coach of the team. Maddie Malhotra/Getty Images

Ime Udoka has led the Boston Celtics to the NBA Finals in his first year as head coach of the team. Maddie Malhotra/Getty Images
Listen Now

The NBA finals are underway. The Golden State Warriors evened the series at one game apiece after beating the Boston Celtics Sunday night. And Celtics head coach Ime Udoka is one of the coaches that helped the NBA break a barrier: After a recent round of hiring, half of the NBA’s 30 teams will now be led by a Black head coach.

Celtics player Jaylen Brown had this to say about those recent hires of Black coaches, including his own, at a press conference: “I don’t understand what took so long.”

Close to three-quarters of NBA players are Black, and recently, they’ve been able to speak more boldly on this issue, according to Ketra Armstrong, director of the Center for Race and Ethnicity in Sport at the University of Michigan School of Kinesiology.

“We’re at a different cultural pulse in our country,” Armstrong said. She also said the league has been getting pressure from sponsors. “So now for sport organizations to address diversity, to call out their own racist practices, that’s not an option. It’s becoming a requirement.”

But other parts of the league still haven’t changed, according to Akilah Carter-Francique, executive director for the Institute for the Study of Sport, Society and Social Change at San Jose State University.

“Coaching is one level,” she said. “But how are Black men and Black women represented in other parts of the organization?”

Not well among referees, athletic trainers and in teams’ front offices, Carter-Francique said.