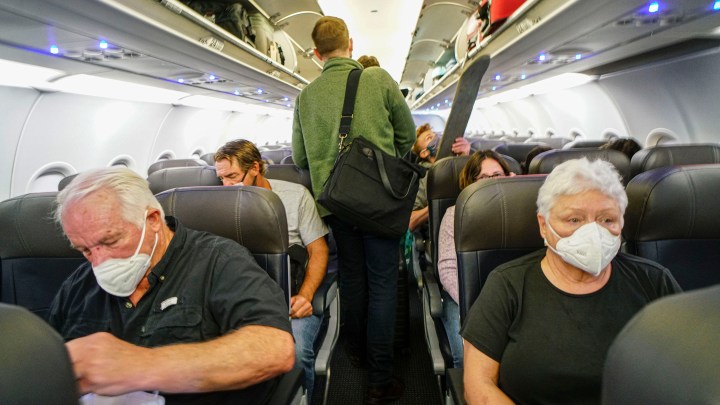 COPY
Consumer surveys find most Americans are wary of getting on a plane right now. Sandy Huffaker/Getty Images
COVID-19

Consumer surveys find most Americans are wary of getting on a plane right now. Sandy Huffaker/Getty Images
Listen Now

United, JetBlue, American, Alaska and Southwest are all going to report earnings this week. Last week, we got a preview of what we’re likely to hear when Delta Air Lines reported that in the second quarter, when the COVID-19 economic slowdown was at its worst, its revenues were down more than 90%.

Air travel is one of the activities consumers have pulled back from the most. When COVID-19 began spreading in early spring, no one wanted to sit on a plane elbow-to-elbow with strangers for hours breathing recycled air.

“You know it got down to about 95% below last year’s levels for the peak of the shutdowns in late April and early May,” said Colin Scarola at CFRA Research.

When the economy started to reopen, air travel “started to rebound a lot — got up to about 25% of last year’s levels by June. The problem is, I think that’s now stalled,” he said.

With COVID-19 cases surging around the country, leisure and business travelers have again pulled back on their flying plans. With only a fraction of their seats filled, airlines can’t cover costs like airplane leases and pilot and flight crew salaries.

Peter McNally at Third Bridge said airlines are doing whatever they can to trim expenses, and hoard cash.

“So it’s involved equity raises, debt raises, credit lines — there’s a lot of creative financing,” McNally said. “Companies have taken as many steps as they could, every dollar of government funds available.”

That includes $25 billion in grants from the federal government’s pandemic relief package. That money comes with one major string attached: Airlines have to keep employees on the payroll — no furloughs or layoffs — until October 1. After that, several carriers including Delta, United and Southwest, have already warned that pay cuts and layoffs are coming.

Consumer surveys find most Americans are wary of getting on a plane right now. That’s not lost on the carriers, said Skift Airline Weekly editor Madhu Unnikrishnan.

“Southwest, Delta, American, United — they’ve all mandated facial coverings on board,” Unnikrishnan said. “The problem is there’s no directive from the federal government. So it leaves it entirely up to the airlines to enforce this.”

Airlines are promoting their new on-board health and safety precautions. But, Scarola said, “I don’t think there’s much the airlines can do on this issue — it’s just people associate flying and the cramped space as a risk.”

Until consumers feel more comfortable flying again, the industry’s troubles will be tough to reverse.