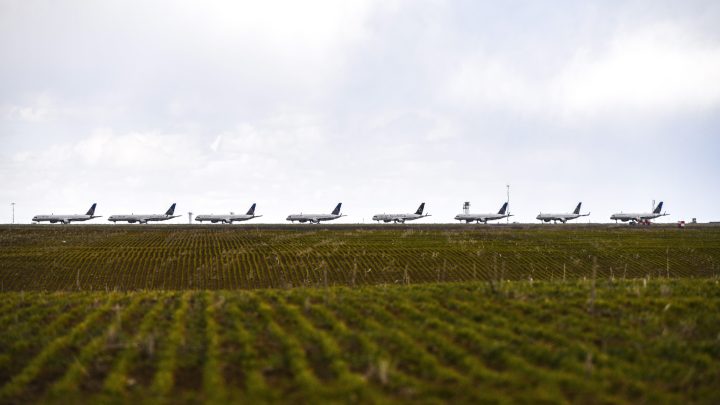 Boeing CEO Dave Calhoun told NBC’s “Today” show that he believes it’s “likely” that a major U.S. carrier will go out of business this year. After making that prediction (and adding he didn’t want to “get too predictive on the subject”), Boeing’s spokespeople downplayed the statement, insisting Calhoun was simply speaking to general uncertainty in the sector. But those are big words coming from a guy whose company sells planes to airlines. Given current market conditions, is there a chance that might happen?

According to the trade group Airlines for America, passenger traffic at airports is down more than 90%.

Southwest Airlines said that it is expecting to lose $30 million to $35 million per day right now. American said it’s trying to cut its losses to $50 million a day by next month.

Rob Mark, a commercial pilot and aviation industry blogger, said most airlines are worried about having enough cash on hand to make good on lease payments at airports.

“Some airlines are stronger than others. And although we thought we would have no more mergers after the last round, I think we’re going to find that somebody is going to fail,” Mark said.

And if there is consolidation, Mark said it will eventually mean more expensive airfares. Gary Leff of the travel blog View From the Wing, said that could be compounded by pressure to accommodate more room between passengers on flights because of COVID-19.

“Dividing that space among fewer passengers is going to mean both actually fewer flights and an average higher average fare,” Leff said.

Last month, some airlines started getting federal grants and loans as part of the Coronavirus Aid, Relief and Economic Security Act. Those were meant to allow them to pay employees through the end of September. A clearer sense of where the industry is headed should emerge once that funding runs out.