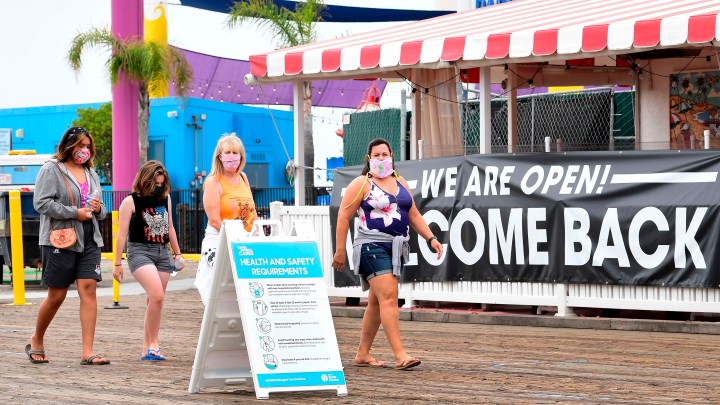 COVID-19 cases and hospitalizations are spiking — from Florida and South Carolina, to Texas, Arizona, California and Washington. And the response from state officials is all over the map.

Washington’s governor just mandated all state residents wear masks in public. In Florida and Texas, that’s optional, so some local officials are mandating mask-wearing on their own.

All of this leaves consumers, and the businesses trying to serve them, confused.

Take Joely Gerber, for example. She is 27 and just finished her second year of law school — remotely — in New York.

She really wanted to fly home to LA this summer, but the coronavirus has made her reconsider.

“You know when you sit watching the news all day you get very freaked out — that it’s very easy to catch it, the numbers just keep going up,” Gerber said.

A lot of Americans face the same dilemma. They want to go places but feel safer staying home.

“There’s still a significant number of people who say they just don’t feel comfortable jumping on an airplane,” Unnikrishnan said.

The main reason, he said: lax and inconsistent health and safety rules, for passengers and crew.

For instance, at LAX they’re starting to temperature-screen passengers.

“That’s not true at other airports. Most airports are recommending facial coverings, but not all are requiring them,” Unnikrishnan said.

Most airlines require masks in-flight, but only a few threaten to ban noncompliant passengers.

“Since there is no overarching law that requires these things, it’s up to us to find out. It’s just a hodgepodge and it’s just a mess,” Unnikrishnan said.

Businesses of all kinds are facing pretty much the same mess of overlapping federal, state and local guidelines. Meanwhile, they need to bring in customers, while keeping their employees safe from infection.

In the end, Gerber decided to fly home to LA.

“I felt like, I haven’t seen my family in a few months, ultimately I decided it was worth taking a calculated risk,” she said.

Everyone on the flight wore a mask. Gerber’s fine, and so are her 60-something parents.