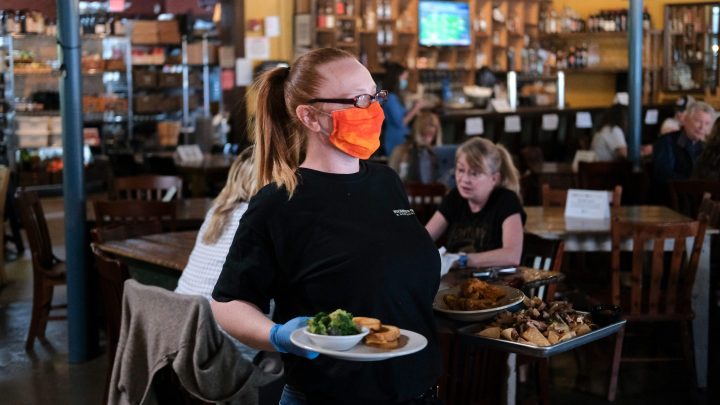 COPY
A waitress wearing gloves and a mask carries food at a Tennessee restaurant on April 27. Tennessee was one of the first states to reopen restaurants. Jason Kempin/Getty Images
COVID-19

A waitress wearing gloves and a mask carries food at a Tennessee restaurant on April 27. Tennessee was one of the first states to reopen restaurants. Jason Kempin/Getty Images
Listen Now

Yesterday, Collin Adams’ wife went to Cracker Barrel — the restaurant/country store chain — to pick up some takeout. They live in Tennessee.

“And my wife said it was absolutely packed,” he said. “People were there celebrating Mother’s Day, and the only people she saw wearing masks were the employees.”

Adams said the idea of sitting down at a restaurant right now fills him with existential dread. Also, he’s a pastor.

“You know, if someone gets supersick, I might have to go see someone who’s in their 80s or you know 90s, or I have a woman who’s 103, and the risk just isn’t worth going out for,” he said.

Apple will reopen some of its stores this week, joining other big retailers that are considered nonessential, like Starbucks and Macy’s. But just because consumers can go back to stores and restaurants doesn’t mean they will.

This morning I asked people on Twitter: are you going back yet? Almost everyone said not just no, but absolutely not.

“It just doesn’t seem safe yet, even if people stay far apart,” said James Smith, who lives in Phoenix. He’s seen what the virus can do. His colleague was hospitalized with it. His sister has it.

“The symptoms are atrocious,” he said. “I wouldn’t wish it on anybody.”

Sharisse Johnson lives in Mississippi and says she can’t imagine going back to a restaurant anytime soon.

“To sit in a place for an extended period of time in close quarters with other people? Not interested right now,” she said.

Even some folks who go to stores are conflicted about it. Dana Franks lives in Nashville, Tennessee, and stopped by Macy’s this weekend to buy some makeup. She felt pretty safe but also kind of guilty.

“It’s a very weird feeling — like I shouldn’t be there,” she said. “There’s a lot of that feeling right now.”

And when she went out to eat at a restaurant about a week ago, she was alarmed that the establishment seemed to be taking no precautions.

“They, I think, had their own political thoughts on it,” she said. “They didn’t seem to really have any social distancing happening at all in the seating. And they had things on the tables, like they had condiments — all the stuff that I know is not really supposed to be happening. And I just didn’t enjoy it. I didn’t feel safe.”

Of course, if places are packed, that means a lot of people are going out.

Patrick Bell, who lives in Austin, Texas, has gone to some local restaurants and to a shop for a bike repair. He said it actually makes him feel better.

One night he stopped by a local pizza joint. “And there was something about just going in there and chatting with the person behind the counter that was, it was a weirdly like temporary return to normalcy,” Bell said. “I mean, even though we’re both wearing masks, but something about that was pretty calming.”

And does he feel safe?

“Not really concerned,” he said. “As long as I’ve got my face covering, I feel like you know, what more can you do?”

He is now taking his temperature every day or so, just in case.