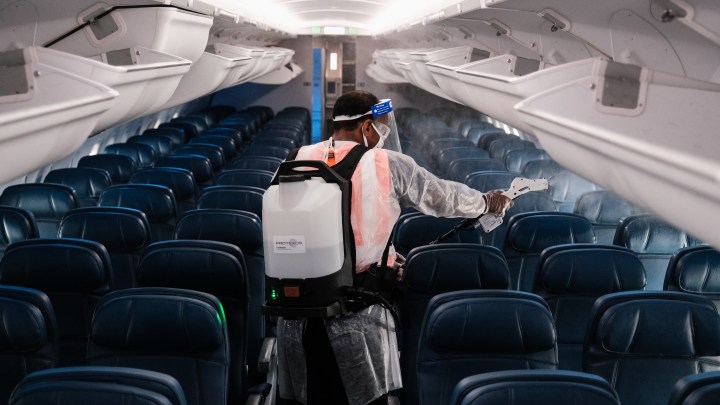 COPY
An employee disinfects an airplane at Ronald Reagan National Airport in Virginia in July. Airlines are burning cash because there are still expenses, regardless if people are flying. Michael A. McCoy/Getty Images
COVID-19

An employee disinfects an airplane at Ronald Reagan National Airport in Virginia in July. Airlines are burning cash because there are still expenses, regardless if people are flying. Michael A. McCoy/Getty Images
Listen Now

Delta Air Lines reports third quarter earnings on Tuesday, with United reporting on Wednesday and American and Southwest reporting next week. There’s a phrase likely to be thrown around as the companies detail how they’re getting through the pandemic: “cash burn.”

A company’s cash burn rate measures how quickly it’s spending its financial reserves. The International Air Transport Association said airlines will burn through more than $77 billion during the second half of this year.

“Most companies, particularly airlines, just don’t have revenues coming in, but they can’t get rid of all of their costs at the moment,” said IATA chief economist Brian Pearce. “So they are running down their cash balances in the bank. They are burning cash.”

And they are burning cash at a rate of many millions of dollars per day. Last quarter, Delta reported a daily burn rate of $27 million.

But cash burn calculation is not standardized.

“I figured cash burn, it’s ‘OK, we had this much cash, now we have this much cash.’ But no, there are all kinds of little carve-outs and differences between the airlines,” said Brett Snyder, who runs the airline industry blog, Cranky Flier.

For instance, whether an airline includes principal payments or debt service payments in their cash burn will tell a different story to investors.

But no matter how the number is calculated, unrelenting cash burn means more debt. Former airline executive and industry analyst Robert Mann said an analogy might help explain it.

“You go to the rent-to-own place, buy a bunch of furniture and burn it,” he said. “You still have to pay for it, ultimately, but you burn it.”

But Jack Hersch, who follows distressed businesses for S&P Global Market Intelligence, said the airlines are in better shape than they’re letting on.

“They’ve got almost uniformly more than a year in some cases, more than two years of running room with cash as it currently stands on the balance sheet before they end up in trouble,” he said.

That’s because before the pandemic hit, the industry was making enough cash to burn.