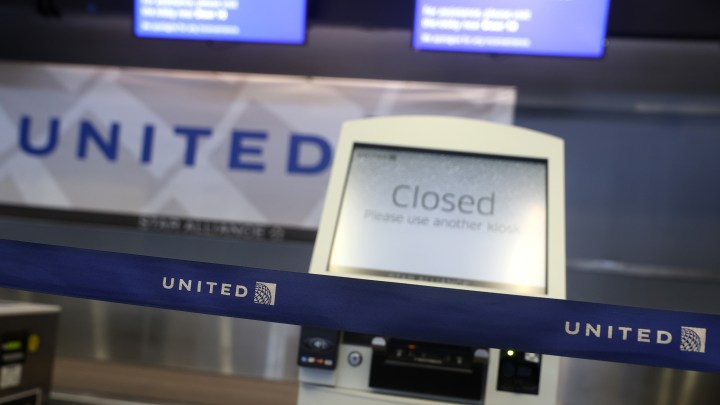 COPY
A closed United Airlines kiosk at San Francisco International in July. The carrier and its industry have been piling up losses. Justin Sullivan/Getty Images
COVID-19

A closed United Airlines kiosk at San Francisco International in July. The carrier and its industry have been piling up losses. Justin Sullivan/Getty Images
Listen Now

The company’s CEO, Scott Kirby (whom Marketplace spoke with in December), said before the earnings call Thursday morning that “aggressively managing the challenges of 2020 depended on our innovation and fast-paced decision-making.”

United said it expects total operating revenue in the first quarter of this year to be down 65% to 70% from the same time two years ago. Which means the airline has to make a number of short-term decisions now to stay afloat. United’s trying to be as nimble as it can, but industry consultant Michael Boyd said that’s not saying much when discussing airlines.

“That means that you’re moving the transom of the Titanic a little quicker than somebody else,” he said.

The biggest challenge for the whole industry is to cut losses quickly.

“The idea being, we’ll try something, but if it doesn’t work, we get the hell out and try something different,” Boyd said.

Nobody really knows when demand for flights will return to what it was before the pandemic, or if it ever will. Some are hopeful we’ll return to 2019 levels later this year. Others say 2023 or 2024 are more realistic forecasts.

“You can think of this as a game of survival,” said Samuel Engel, aviation consultant at ICF. He said when the industry has seen downturns in the past, two things have been consistently true.

“One, when travel demand returns after a slump, it returns faster than people think,” he said. “And the other thing is that periods of capacity reduction in the industry lead to greater profitability for the survivors.”

United said it’s looking to permanently slash $2 billion from its annual expenses, which could mean fewer planes and personnel.

But what worries Henry Harteveldt, travel industry analyst at Atmosphere Research Group, is that major airlines could make decisions without the passenger in mind.

“Will they invest in the products and services that the passengers like and will pay for? Or cram more seats onto their planes?” he asked. “Will they strip away the things that distinguish them from budget airlines?”